The history of underwear: pantaloons, petticoats, corsets and Kardashians

From pantaloons and petticoats, to bloodied corsets and Kardashians, our briefs have a long history 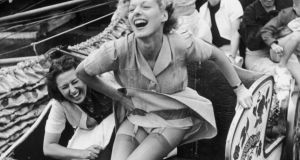 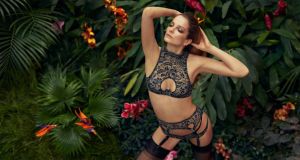 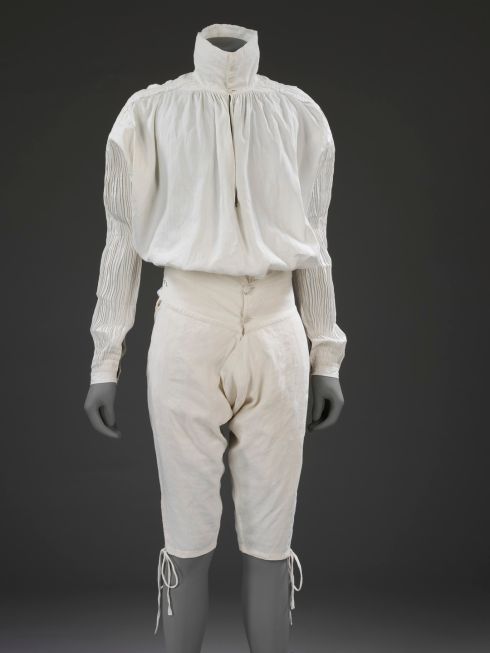 Stationed with her British diplomat husband in Baghdad in the 1940s, Lady Betty Holman found herself one day wanting to communicate with some locals, but not knowing a word of Arabic. So to break the ice she decided to pull up her skirts and show her knickers to the ladies.

“They were thrilled,” she recalled. “And we got on very well after that. They showed me theirs which were made of calico.” The silk chiffon knickers in question, decorated with hunting scenes in machine lace, are on display for all to see now at London V&A’s current exhibition Undressed: A Brief History of Underwear.

Underpinnings have often been not only hidden from view but hidden from history. Apart from very costly or sentimental pieces, who wants to leave their knickers to posterity? Yet what we wear closest to our skin, revealed in intimate circumstances, says a lot about shifting notions of public and private worlds. The cut, fit, fabric and decoration reflect changing social and cultural attitudes to gender, sex and morality, according to exhibition curator Edwina Ehrman.

Some notable exhibits are, for instance, long cotton pantaloons worn by Queen Victoria’s mother, the earliest pair of female underpants to survive and an 1842 groom’s waist belt worn on his wedding day using an early version of elastic.

Undressed is the biggest museum exhibition of underwear ever to go on display. For it, the V&A acquired more than 60 pieces for its permanent collection.

All sorts of what were once quaintly known as “smalls” are on display, mostly contemporary, from men’s briefs designed to enhance the crotch to early examples of that thing called a thong inserted in the private parts, briefly fashionable in the early 2000s along with crinolines, boxer shorts, briefs, bras, hosiery, lingerie, thermals and nightwear. One of the first things learnt was that women didn’t wear knickers, or drawers as they were called, until the beginning of the 19th century. The lexicon of lingerie is a whole vocabulary in itself. Drawers were so called because they were drawn up over the body. 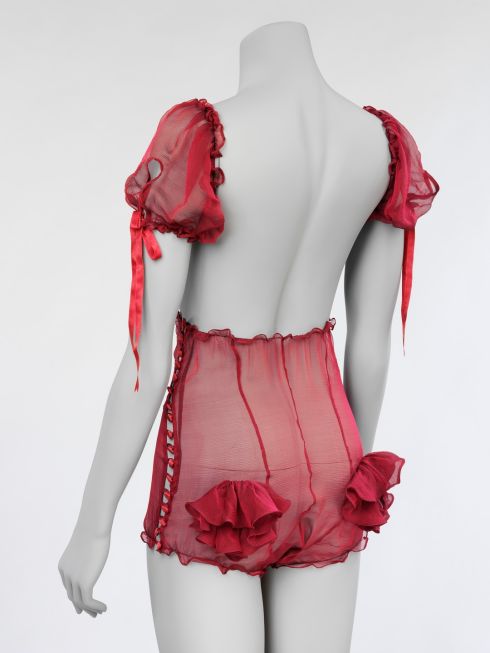 The exhibition explores underwear design from the 18th century to the present day and uncovers – if that is the right word – some of the earliest foundations of corsetry by staymakers. Until the 1780s these craftsmen, known as tailleurs de corps, visited clients at home to fit their stays. It was a complicated ritual, but also an unusually intimate contact with women and their bodies, the procedure for which one can only imagine.

Originally constructed in whalebone to accentuate the curvature of the body, reduce the waist and enhance the embonpoint, corsets and tight lacing had extraordinary effects on the female form.

For example, a very restrictive 1890s whalebone and cotton corset with a waist under 19 inches in circumference is displayed alongside an X-ray revealing its dramatic impact on the inner organs. I was reminded of a description by a Wimbledon star during the first World War of bloodied steel boned corsets lying to dry on dressing room rails in English tennis clubs after matches. 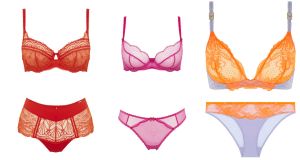 Underwear The best you can buy in the shops

What really makes an impact in the exhibition are the tiny waist spans that corsets and tight lacing created, highlighting 19th century debates about how to design a fashionable shape without damaging the body.

Soozie Jenkinson, director of lingerie at Marks and Spencer who brought her team to the show, said the miniscule size of these waists made the most startling impression. Shapeshifting examples range from a magnificent shocking pink corset in silk satin, lace and whalebone with steel busk and metal eyelets from the 1890s and an “austerity” corset woven from paper twine during the first World War, to a present day waist training corset, a Spanx style slimming gadget endorsed by celebrities such as Kim Kardashian.

But then we are reminded that the S-bend corset from the early 20th century was also designed to accentuate the rear end and a handspan waist. The most extreme corset in the whole show is one designed by the celebrated French corsetier Mr Pearl – whose own waist is only 18 inches (45.7cm) and who wears a corset 24 hours a day – for the performance artist Dita Von Teese, at 18 inches and studded with Swarovski crystal.

Male underwear is also included and the exhibition opens with many well preserved examples, such as a white linen shirt and drawers and handsome white shirts from the Georgian period, when it was considered bad manners to expose the sleeves, but displaying freshly laundered lace cuffs with a decorative shirt front demonstrated the wearer’s status and privilege.

One remarkable pair of striped drawers from the 1890s was acquired by the museum in the 1930s though its owner was not documented at the time, in itself a telling omission.

Some of the stockings are memorable. There are bright red and green knitted silk stockings from 18th century Spain, embroidered in silk; an equally lavishly embroidered pair worn by Queen Alexandra and one embellished with a beaded and silk serpent from a 1900 exhibition in Paris. These are shown alongside exquisitely embroidered garters, always a source of male intrigue and fascination.

One is inscribed with the cryptic words “I love not this world in which thou must stay, but love that treasure that abides away”. A contemporary seductive bra set sparkling with coloured crystals from Cadolle was obviously meant for public view.

Conical pointy bras contributed to the unmistakable full skirted and narrow waisted shapes of the late 1940s and early 1950s and later to their celebrated revival by Madonna (minus anything else) in her Blonde Ambition 1990 tour designed by Jean Paul Gaultier.

One Irish exhibit is a 1760s “French style” finely made hooped petticoat from Co Sligo. Its well to do owner, “was a Miss O’Hara who was advertising her status and wealth and her slimmer waist was a sign of gentility”, Ms Ehrman told the BBC. Another item, a paisley print petticoat made around 1860 on cotton filled with goose down came from Cork.

Mannish boxer shorts and briefs, sports bras, leotards, leggings and camisoles all have their origins in the past. Jock straps were introduced in 1887 for male cyclists to support their private parts; modern Castelli cycling shorts with padded seats to prevent saddle sores are on display alongside the first cycling corsets for women and unappealing “gender neutral” underwear from Acne. The first string underwear in 1933 was based on fishing nets.

In the upstairs gallery, the work of designers from Galliano to Calvin Klein show how they subverted or exaggerated the appearance and function of underwear, playing with both the basics and the sexy and sensual. Galliano’s delicate silk embroidered muslin dress with silk knickers drew from 18th century dress while Jennie Baptiste’s Brixton Boys from 1971 shows tattooed guys with their exposed Calvin Kleins above the waistbands of their jeans. According to Ehrman it was mainly gay men who took male underwear beyond the basic.

Fetishism has not been overlooked either: a latex corset and knickers was specially made for the exhibition by the House of Harlot, a London company specialising in fetish fashion.

There is a short video in which three contemporary underwear designers, Pedro Lourenco, creative director of the Italian brand La Perla, Sarah Shotton of Agent Provocateur (the company founded by Vivienne Westwood’s son Joseph Corre) and Fifi Chanchil, owner and designer of the French company explain their design process.

It is a riveting and revealing exhibition in every sense, though, with all due respect to Lady Holman, unveiling one’s underwear might not be recommended today as an effective method of communication. Undressed: A Brief History of Underwear sponsored by Agent Provocateur and Revlon runs at the V&A until March 12th, 2017. For more information, see vam.ac.uk/undressed