Ten-year-old Hermes Birkin bag sells for €184,000 at auction in London 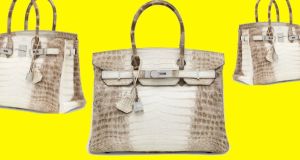 Named the Himalaya Niloticus, the bag was created in 2008 and has an 18-carat white gold clasp, as well as being encrusted with several dozen diamonds. The bag exceeded its £100,000 - £150,000 guide price yesterday, setting a new European record for the most expensive handbag sold at auction.

The world record for a bag sold at auction – also a Hermes Birkin – is €288,283.48, set in Hong Kong in 2017. According to Christie’s auction house it is now the “undisputed most valuable bag in the world”.

This was the first time the Himalaya Birkin bag had been offered in a European auction, said Matthew Rubinger, international director at the auctioneers.

Some vital statistics: The 30cm wide, matte white bag is made from nilo crocodile hide. Its name refers to the colour gradient, a nod to the snowy hills of the Himalayas.

Fans of the Himalya Niloticus include Kim Kardashian, Victoria Beckham and Celine Dion. Regular Birkin bags can start at around €8,000 each but even if you had that kind of cash, securing one is not easy as they have long waiting lists.

French luxury fashion house Hermes created the first Birkin bags in the 1980s, naming them after the singer and actress Jane Birkin.

The handbag legend goes that Birkin met the chief executive of Hermes on a flight from Paris to London. She was complaining that she couldn’t find a decent weekend bag when he offered to design her a holdall and asked if the company could name it after her.

She said she was “flattered to death and said yes, yes, yes”. Suddenly everyone was “wandering around with your handbag”, she said.