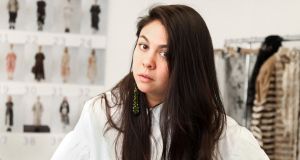 Simone Rocha’s editing of A Magazine Curated By is sophisticated, intelligent and illustrates her wide connections to artists and photographers, her family and people that inspire her.

Writer Lou Stoppard’s introductory essay on Rocha outlines the designer’s continuing association with Louise Bourgeois and the elements that make up her collections.

There is a series of magnificent portraits of women including her mother Odette looking as regal as a Goya painting and one of Rocha’s young daughter Valentine Ming.

There are family portraits (a number of her father John on his fishing trips), artwork by Dorothy Cross, an interview with former president Mary Robinson and recipes from Ruth Rogers and Darina Allen.

Standing Portraits, styled by close friend Celestine Cooney, features Chloe Sevigny in tulle and Cooney herself in faux fur. There’s an excerpt from A Feminist Manifesto by Chimamanda Ngozi Adichie, Perry Ogden describing his first impression of Bacon’s studio Reece Mews, various photographic fashion essays, including one from Sarah Moon and a short story by Donal Ryan, and more. The 215 page magazine is quite an achievement and one to keep. It is published by www.amagazinecuratedby.com, €19.

Kelly green will be everywhere this weekend, that spring grass colour indelibly associated with St Patrick’s Day and the shamrock, a tradition that only emerged at the beginning of the 20th century. Green was a colour also associated with revolution in 1789 when the linden leaf temporarily became the green cockade of the French revolution only to be usurped by the tricolour. This season in fashion, Gucci, Valentino, Loewe, Dries Van Noten and Prada all featured green in their spring/summer collections and Jonathan Anderson’s spotted green gown for autumn/winter was one of the highlights of his collection in London.

At the end of this month the Galway-based Tweed Project will be supplying the American artist Andrea Zittel with garments made in a specially designed and woven tweed by Molloys of Donegal. It is part of an innovative exhibition at Lismore Castle called Palimpset in which the garments will be available for visitors to borrow – like a book from a library – and then return. “See the show, wear a piece of it home” is the idea.

Zittel who lives in the desert near the Joshua Tree National Park in California and well known for her unisex wrap designs – her uniforms – is also a weaver and throughout her career has used her home and her clothes as a way of exploring her subject.

She was invited to engage with Irish weavers and designers on the project by its curator Charlie Porter. “We gave her advice on the tweed and what would work and the type of weave,” explains Triona Lillis, founder with Aoibheann MacNamara of the Tweed Project who have made garments in a square shape that looks like a napkin with adjustable straps.

Zittel hopes that wearing them “will inspire people to experiment with new ways to revive the rectangle”. Palimpset will run at Lismore Castle from March 30th to October 13th. Six other artists are involved in the show, Zittel being the only one involving garments.