An exhibition in Newbridge marks the 20th anniversary of her death 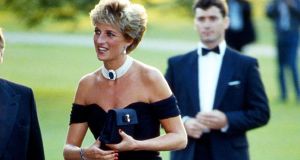 “She would rock up to our studio with her bridesmaids. She had taken them roller skating beforehand. We were around the same age and I think she felt safe in our studio,” recalled the codesigner of Princess Diana’s celebrated wedding dress in 1981, Elizabeth Emanuel, at the opening of Newbridge’s Museum of Style Icons latest exhibition Diana: A Fashion Legacy marking the 20th anniversary of her death in August 1997.

That royal gown in ivory silk and taffeta, which became the most famous in the world – seen by more than 700 million people – was donated to Madame Tussauds in London. A copy sold for £100,000 in 2005, but the original final calico toile (which the princess would have worn more times than her wedding dress) can now been seen in Newbridge along with a replica veil and tiara similar to that worn on her wedding day and other artefacts and personal effects.

But among the other items, even more interesting, and very different – the most important exhibit – is a sexy black silk off-the-shoulder number designed by Christina Stambolian, which the princess wore to the Serpentine Gallery on the night Prince Charles admitted his infidelity. It’s known as the Revenge dress. If her pre-wedding style was defined by frills, bows and whimsical details, her later styles were sexy, sporty and often androgynous.

Emanuel who has visited Ireland before to dress Enya for her Memories of Trees videos, says the wedding dress was deliberately “theatrical, dramatic, fairy tale and broke a mould”. It’s a style that has nowadays been replaced with more favoured classic looks. “I like drama, and the one time you can have it is on your big day or on the red carpet,” says Emanuel, who has dressed a long list of celebrities including Marie Helvin, Jerry Hall, Sharon Osbourne, Freddy Mercury, Bianca Jagger, Jane Seymour, Elizabeth Hurley along with designing uniforms for Virgin Atlantic and Brittania Airways and movie costumes.

Having surmounted legal problems over her name, which she now finally owns, she is about to relaunch her label next year. “The time is right”, she says. “It will be a semi couture ready-to-wear collection, a whole new look which will still be romantic and dramatic.” Her calligraphy – a passion – is notable in her sketches of other dresses and outfits she designed for Princess Diana, which are also on display at the exhibition.