Meet ‘the Zoom shirt’: for people who don’t want to dress for work 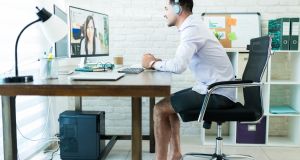 Only 10 per cent of people get dressed for working from home at the start of the day, according to a recent poll. Photograph: iStock

Work dress codes have radically altered during the pandemic. According to a poll from market research group NPD, only 10 per cent of people get dressed for working from home at the start of the day and then change into comfortable clothes later.

With virtual video conferencing as the only contact with colleagues, one item of clothing that has become essential is the so-called “Zoom shirt”. According to Urban Dictionary this is the “shirt or blouse that’s kept on the back of your desk chair to quickly be presentable for video conferences”. A recent poll by LinkedIn found that 42 per cent of camera ready home workers owned one.

“It allows you to retain an image of professionalism on camera without having to get kitted out in full office attire, when you’re sitting at your kitchen table all day,” says Rupert Wesson, director at Debrett’s. “Dressing in a formal manner helps you look and feel more polished. It conveys respect to others. A study actually found that employees were more productive when casual dress was permitted. The ‘Zoom shirt’ supports this idea.”

Founder of social media strategy company AmpliPhi, Spencer X Smith, says that currently his work outfit consists of shorts, “more often than not” no shoes and a Zoom shirt.

“It’s a long sleeve button up in medium blue and shows up well on camera,” he says. “I really enjoy these shirts and they dress up or down well. They’re not cheap but definitely worth it.”

The pandemic has shifted people’s ideas about what to wear, with a focus on simplicity and pared down wardrobes. “Outfit of the day” culture is no longer relevant in this new normal.

“I think it’s safe to say that dress codes have been gradually relaxing for some time now,” says Charlie Teasdale, style director at Esquire magazine. “The recent benchmark seems to be the shifting attitude of financial institutions which have all got rid of suits and ties for most employees,” he says. Last year Goldman Sachs relaxed their dress code asking staff to exercise “good judgment” in what they wore, while a 2018 poll found that only one in 10 people still wore suits to work.

Another factor is the rise of shared office spaces, where companies share hot desk areas. “This means that attitudes to the workplace and workwear are becoming more casual,” says Wesson.

Smith says he will continue to wear his shirt as we return to normal working practices. But there is a chance work dress codes will be permanently altered. “Lots of people will opt to continue working from home, so the nature of workplaces and dress codes will become even more fluid than it was before lockdown,” says Teasdale. “There’s a new commute too: people are cycling (or scooting or running) into work more often, too, so the rigours of that will have an effect on how people dress as well.”

By the time offices fully reopen, these factors and consumers’ increased awareness of the environmental impacts of the fashion industry could lead to the biggest change we’ve seen.

“I think the pandemic has caused many consumers to rethink how they consume and get dressed each day,” says Ashley Rickett, Luxe manager from online consignment and thrift shop thredUP. “The reality is consumers still want variety and fun from their wardrobes without the waste to their wallet or the planet.” – Guardian

Hilary Fannin: Will you help send these Irish children back to school?
9