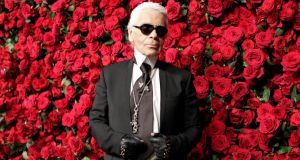 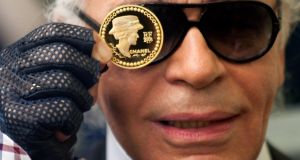 Karl Lagerfeld presents a €5 coin, designed by him in 2008, to commemorate the 125th anniversary of birth of Gabrielle “Coco” Chanel. Photograph: Reuters/Philippe Wojazer/File Photo

Karl Lagerfeld’s death after more than three decades at the helm of Chanel marks the end of an era that began when the German designer joined the company in 1983, six years after the death of its founder Gabrielle “Coco” Chanel.

Invitations to the twice-yearly Chanel shows in Paris became the season’s most spectacular events attended by more than 2,000 guests in the Grand Palais off the Champs-Élysées, flushing out celebrities, high-level politicians and the best-dressed crowds in the city. These affairs generated enormous publicity worldwide for the Chanel name, keeping it in the limelight.

The German-born designer who produced eight collections a year for the storied French house was also the creative head of Fendi and was the first to collaborate with the high street with a sellout collection for H&M in 2004. His prodigious energy extended to many other creative collaborations over the years.

His ability to refresh the familiar codes of Chanel season after season – quilted bags, tweeds, jewellery, little black dresses – with indefatigable and unstoppable vigour earned him legendary status in the world of fashion and made him the most valuable asset of the publicity shy Wertheimer brothers, owners of the company worth some €6.5 billion.

“He could draw, fewer do now, and that type of designer with that kind of savoir faire is over,” said Irish designer Peter O’Brien who was head of design at Chloé in Paris for a time in the 1980s. “He drew like a machine and that is how he designed and, in an age, when a lot of designers don’t do that anymore, he designed everything. He was superhuman in the amount of work he produced.”

His collections were innovative theatrical events with elaborate stage sets costing around €3 million and with more than a hundred top international models. And because he had no time for nostalgia they always had contemporary relevance – he insisted on keeping his finger on the pulse and knowing what was happening on the street.

There were sets with aviation themes (after an airline strike); reference to artist Richard Serra (after a major exhibition in New York); wind turbines (relating to energy concerns); a traditional French brasserie (under threat at the time); a carousel (relating to those in the Louvre); a Parisian boulevard; a supermarket and a modern art gallery (the idea of clothing as a canvas for self-expression).

At the end of every show, in his customary severe uniform of starched high collar, black jacket and dark shades, he strode down the long catwalk, sometimes arm in arm with a model or celebrity, occasionally with his young godson Hudson Kroenig. In 2013, he sent two brides hand in hand down the runway making a statement about French marriage equality law.

He came to Dublin only once, in 1987, for a Chanel fragrance promotion in Switzers (now Brown Thomas) when Denis Brennan was managing director of the Switzer Group. Brennan who remembers him as pleasant but distant “with a great sense of himself” arranged an informal tour of Iveagh House because Lagerfeld at the time was particularly interested in 18th-century architecture.

For a designer his achievement in keeping the name of Chanel internationally recognisable and desirable for more than 30 years is in itself a testimony to his extraordinary talent, ingenuity and indefatigable energy. It’s been announced that Virginie Viard, Chanel ’s fashion studio director, will succeed Lagerfeld.