Domino Whisker: ‘What I do has to be meaningful, otherwise why do it?’

After her father’s illness, the artist found a way to tell everyday stories through embroidery 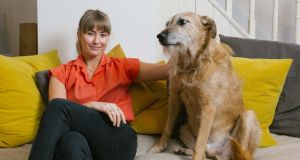 “Everything I do is deeply emotional, because that is the world I am living in and what I do has to be meaningful, otherwise why do it?” shrugs Domino Whisker, whose embroideries – personal, modern takes on a familiar domestic craft – have stories to tell. A lot of her work is text, writing skills inherited from her parents, with some of her most popular pieces being I Am Fragile, Born Nervous, Friday I’m in Love, Keep Swimming, Nothing Happened and other small detailed motifs, many of which are now sold out.

She works alone in a red brick terrace in Ringsend, in Dublin, her only companion Mr Blue, her father’s lurcher. Books on architecture, Russian constructivism and Dublin landmarks lie on a table.

“I need time and space to think. Some of the pieces can take two hours, others 70, but each time I am ruminating on the emotion that sparks the piece and when I am finished I can let it go,” she says.

One of two daughters of the artist Charlie Whisker and the fashion designer Mariad Whisker, who are now separated, Domino has been very public about the fact that she has taken on the role of caring for her 70-year-old father, who is suffering from Alzheimer’s; she lived with him for the first few years of the disease. She visits him daily in a home in Blackrock, a few kilometres away, and talks about the distress, the grief – and rare moments of joy – involved.

She started embroidery almost by accident about five years ago when her father was first diagnosed. “He would go to bed quite early and I would sit there. I had to do something with my hands that was meaningful, so I started stitching the outline of my hand to see how accurate it was and then I just started writing snippets in my diary.”

Completely self-taught, following tutorials from a book her mother found in France and others, she has mastered the complex techniques involved in embroidery – silk shading, bullion knots, lattice work, back, satin and chain stitch – to which she brings her own creativity.

She shows me a treasured piece, made by Charlie’s mother, Ethel Jewell, marking the coronation of Queen Elizabeth in 1953; it is embellished with flowers and words.

“It’s very traditional, and that’s what inspired me to pick up the needle and thread. My dad, the youngest of three, worshipped his mother. She would have been really happy that I look after him, so I feel I am picking up where she left off. Mum’s mother Peggy was an embroiderer too”, she adds.

The current revival of the craft she attributes to its power to embody secrets and its history of protest – suffragettes with their Votes for Women embroidered on silk.

When she first put up images of her work on Instagram three years ago, they immediately attracted attention and led to an invitation by John Redmond of Brown Thomas to be part of the store’s celebration of Irish craft and design, Create, in 2017 and again in 2018.

Since then she has rarely been without needle and thread and is working on a commission for Claridge’s Hotel in London.

“I start with a drawing. What I love about embroidery is that if I don’t like something I can undo it and the best part of hand stitching is imperfection that I only would notice. There are so many things I have no control over in my life, so to come home and be in complete control over one aspect, is such a joy.”

She works on linen and has never bought fabric – “I steal it from my mother and from my grandparents, so it already has a history.”

Her work can be seen in the Devlin and Mayson hotels in Dublin but her commission for Claridge’s is the biggest yet, more than 40 pieces, most of them inspired by the art-deco details of the famous London hotel.

This takes up to four days of the week, the other three are spent on her own work “and not a day goes by when I don’t stitch. I find such comfort in it. Because I am overwhelmed by the sadness in my life, I am trying to create something beautiful in this little house.”

An open and endearing person, her own big dream, however, would be to do tapestry work or make a rug with Ceadogan rugmakers. Just don’t ask her to embroider dogs or children. “I politely say no,” she says. Firmly.