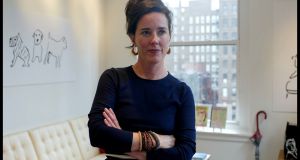 The fashion designer Kate Spade has been found dead in her New York City apartment in an apparent suicide. Police officials said said that Ms Spade (55), was discovered unresponsive at the Park Avenue apartment. She was pronounced dead at the scene at 10:26am after being found unconscious in her bedroom by her housekeeper who called 911.

Ms Spade’s husband was at the scene, according to police.

“We are all devastated by today’s tragedy,” the Spade family said in a statement. “We loved Kate dearly and will miss her terribly. We would ask that our privacy be respected as we grieve during this very difficult time.”

Her Kate Spade New York brand grew into a fashion empire, known for accessories that offered affordable luxury to younger working women. Her brightly colored, clean-lined style offered a spunky take on fashion at time when luxury handbags were out of reach to most consumers, and the industry was dominated by venerable European brands.

Kate Spade New York released a statement calling the news “incredibly sad.” “Although Kate has not been affiliated with the brand for more than a decade, she and her husband and creative partner, Andy, were the founders of our beloved brand,” the statement said. “Kate will be dearly missed.”

Fans of the brand began posting pictures of their favorite handbags on social media in reaction to the death. Chelsea Clinton, daughter of former US President Bill Clinton, was among celebrities to mourn Spade on social media. “My grandmother gave me my first Kate Spade bag when I was in college,” she wrote on Twitter. “I still have it.”

Born Kate Brosnahan in Kansas City, Missouri, in December 1962, Kate Spade was one of the first of a powerful wave of female American contemporary designers in the 1990s.

She built a brand on the appeal of clothes and accessories that made women smile, her cheerful lack of restraint and bright prints striking a chord with consumers. She herself was the embodiment of her aesthetic, with her proto-1960s bouffant, nerd glasses and kooky grin, which masked a business mind that saw the opportunities in becoming a lifestyle brand, almost before the term officially existed.

Ms Spade, who had been the accessories editor of Mademoiselle magazine, founded Kate Spade with her husband-to-be, Andy, in 1993. Frustrated with the handbags of the era, which she found to be over-accessorized, she had wanted “a functional bag that was sophisticated and had some style,” she told The New York Times in 1999.

She did not know what to call the company at first and decided to make it a combination of the names of the co-founders. After the first show, she realised that the bags needed a little something extra to catch people’s eyes. She took the label, which originally had been on the inside of the bag, and sewed it to the outside. With that gesture, she created a brand identity and her empire.

Within a few years, she had opened a store in SoHo, Manhattan, and was collecting industry awards, her name a shorthand for the cute, clever bags that were an instant hit with career women and, later, young girls, status symbols of a more attainable, all-American sort than a Fendi clutch or Chanel bag.

In 1999, the Spades sold the business to Neiman Marcus Group, which sold it to Liz Claiborne Inc. in 2006. Spade became the very visible face of her brand.

Kate Spade New York has over 140 retail stores across the US and more than 175 shops internationally.

The Spades left Kate Spade in 2007 and devoted themselves to other projects. Ms Spade dedicated herself to her family and to philanthropy, and in 2016, with her husband and two friends, launched a new venture, an accessories label called Frances Valentine. She was so committed to the project that she told interviewers she had changed her surname from Spade to Valentine. – New York Times Service, Reuters