From glittering gold to all shades of green, see what the A-listers wore on the red carpet 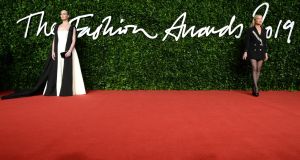 It was the biggest night in British fashion on Monday evening, when Rihanna, Julia Roberts, Cate Blanchett and other A-listers all went to the Fashion Awards, at the Royal Albert Hall in London. Giorgio Armani was awarded the outstanding-achievement accolade, and Naomi Campbell took home the fashion-icon award, for her contribution to the industry.

Most awardgoers provided a masterclass in party-season dressing – shine and sparkle are back, green is a colour to be seen in, and black has never gone away.

The Irish presenter Laura Whitmore and the actor Emma Roberts both emphasised the “little” in little black dress; Whitmore chose a blazer-cum-dress by the high-street store River Island, and Roberts wore a sequin high-low style.

Other guests stuck to party-ready formulas, with only Shailene Woodley attempting the type of avant-garde style normally seen at the Met Gala. The Big Little Lies actor showed how to keep the chill at bay on a crisp December evening by arriving in a padded full-length puffer dress from Moncler’s collaboration with Valentino.

Green isn’t a colour normally seen on carpets, but it worked at the Fashion Awards – mostly because it came in all shades, from pale and icy right up to shocking fluorescents. Rihanna worked a gauzy cover-up and bandeau mini-dress combo, complete with sheer gloves, from her own label, Fenty. The model Adut Akech was all wrapped up in an emerald-green Valentino dress complete with oversized bow. The Game of Thrones actor Emilia Clarke opted for highlighter-hued separates, combining an amped-up fluoro crop top with glittering skirt by Schiaparelli.

There was enough glitz to rival a Strictly Come Dancing final, given all the bows, sequins, metallics and long gowns that sashayed down the red carpet. All done in the best possible taste, of course: Alexa Chung wore a long-sleeved shimmering gown with crisp white collar from her own label; the Killing Eve actor Sandra Oh chose a purple sequin-and-lace dress by Erdem; and the supermodel Naomi Campbell wore a metallic-and-sheer number by Alexander McQueen. The actor and model Rosie Huntington-Whiteley shimmered in a sleek metallic gown by Bottega Veneta, while Nathalie Emmanuel embraced the festive nature of sequins in a fiery shade of crimson.

Naomi Watts went for a sumptuous Bardot velvet dress by the British brand Burberry, with her fellow actor Julia Roberts ditching the dress for a glittering wide-leg jumpsuit.