With plant-based diets and veganism on the rise, fashion brands are finding alternatives to leather 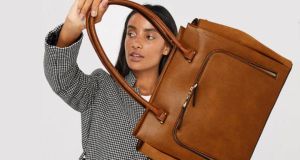 Accessorize now has vegan handbags and backpacks available in its stores

With plant-based diets and veganism on the rise, many fashion brands are finding alternatives to leather and other animal products. The latest is Accessorize with their first ever vegan handbag collection. Registered with the Vegan Society and part of the brand’s “Designed for Good” initiative, the 14 bags will suit most tastes and are free of any animal products. We don’t know where the bags are made, however, though their press release says the manufacturing methods “are kinder to the planet”. The bags – totes, weekenders, shoulder bags, crossovers and backpacks – have girls’ names like Emmy, Dolly, Alice and Millie, with prices from €29, and this backpack called Harriet is €49. Colours come in black, pastel pink and navy. accessorize.com

There have only been seven editors-in-chief of Vogue, one of most powerful roles in fashion. Best known of them is Diana Vreeland and, of course, the present incumbent Anna Wintour. Not so well known is Jessica Daves, an enigmatic figure who preceded Vreeland in the role and catapulted the magazine into modernity. She is the subject of a new book, 1950s in Vogue.

Under her guidance, the magazine was the first to embrace a high/low blend of fashion, introducing world-renowned artists, literary greats and cultural figures into every issue, and profiling the personal style of people from John and Jackie Kennedy to Charles and Ray Eames.

Author Rebecca Tuite, who is of Irish ancestry, has also emphasised Vogue’s championship of Sybil Connolly, describing her and emerging Irish couture “as pretty well a one man show and the man happens to be a woman, the Vitamin C of the Erin-go-Couture movement”. She was praised for her “unaffected modesty, an eye for line and the burning intention of getting the best out of Irish craftsmen”. 1950s in Vogue: The Jessica Daves Years 1952-1962 is published by Thames & Hudson, £65 (€76).

There’s a lot going on with sleeves these days – the more exaggerated the better – though it does raise the question of what to wear over them in cool or cold weather? How do jackets and coats cope with the excess? Still, it doesn’t stop designers wanting them to stand alone, their shapes making their own statement. Here are two spring examples – one in emerald green from Cos, and the other in pink by Baum und Pferdgarten – wear them with very slim shaped skirts or trousers and colours that allow them to show off their silhouettes at their best.

Danish designer Stine Goya’s latest collection, from her lovely studio in Copenhagen near the Royal Palace, was inspired by Aida, the famous opera by Verdi. Prints of serpents, papyrus leaves and lotus flowers, elements of the Egyptian canon, are incorporated into draped and pleated silhouettes. Prints have always been a strong feature of Goya’s collections since she founded the brand in 2006, after years of working in the fashion industry. For spring, they are bold and strong teamed with woven silks, waffle finish knitwear and striped tops. Find Stine Goya in Brown Thomas, Gallery 9, Naas and Macbees in Killarney.