As a former prostitute I applaud Sinéad O’Connor

The singer’s open letters to Miley Cyrus are right: the former Hannah Montana is so driven to dissociate herself from her Disney days that she’ll comply with the production of imagery nearly as blatantly pornographic as anything produced of me in an early-1990s brothel 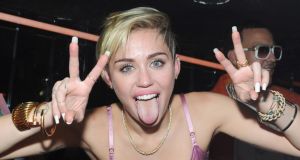 It’s nothing new to see Sinéad O’Connor take a courageous stance on a pressing but largely ignored social issue. She was doing it long before it was fashionable or even tolerable in Ireland.

If by any slim chance you missed her exchanges with Miley Cyrus over the past 10 days, this is how it went. Cyrus had said in interviews that her Wrecking Ball video was inspired by O’Connor’s for Nothing Compares 2 U. Journalists wanted to know what O’Connor made of this.

Instead of responding directly, O’Connor did something I applaud as a woman, feminist and, most particularly, survivor of child prostitution: she drew a direct link between the prostitution of female sexuality and the sexual exploitation of women in the music industry.

Her open letter to Cyrus was forceful in content but gentle in delivery. O’Connor wrote “in the spirit of motherliness and with love”, and from experience. Her comments drew an acrimonious riposte from Cyrus, who retweeted two-year-old tweets of O’Connor’s, posted at a time of intense personal stress, and labelled her “crazy”. Further messages flew between the women.

Their exchange shows how women are set against one another in the struggle the male gaze has imposed on us. O’Connor tried to pass on the wisdom of a more experienced woman; Cyrus, enamoured of the currency of her own sexuality, rejected it. Much in the style of the inventions of the pro-prostitution lobby that I have to deal with, Cyrus trotted out a variant of the your-prudery-could- never-relate-to-my-liberation script. “I don’t ever really plan to offend people, but sometimes that happens because I think people, they’re not open to what they don’t understand,” she said, as if she had happened on some profoundly liberating aspect of being sexually objectified that the rest of us women missed.

It is sad and discouraging to see young women buy into the notions that their worth is their sexuality and that it can be authenticated only by being served up on the most public sort of platter.

Cyrus is so driven to dissociate herself from her days playing Hannah Montana, the Disney star, that she’ll comply with the production of imagery nearly as blatantly pornographic as anything produced of me in the back of an early-1990s brothel. But while people are shocked by what happened to me, what’s happening to Cyrus is considered entertaining.

Mainstream pornography has become increasingly blatant, hard-core and degrading. It was honourable of O’Connor to make clear that she has had enough of this passing for music.

There are many ways to be prostituted, and because the prostitution of sexuality is such a pervasive part of our world now, some women will be aware of these things only in hindsight, if at all.

A few weeks ago I picked up a magazine advertising American Apparel clothes that showed a girl of about 18 wearing nothing but a pair of black Lycra leggings. She had her arms folded across her bare breasts and a look of disturbance in her eyes so acute that I wondered how any company could run such an ad and how any magazine could print it. We have moved beyond the point where sex sells: sexual exploitation sells better still.

In her open letter, O’Connor said: “Whether we like it or not, us females in the industry are role models and as such we have to be extremely careful what messages we send to other women.” How I wish all female artists took note of that. That they don’t is one of the factors that made the concept of prostitution more palatable for me.

On the sunny August afternoon when I first walked down to Benburb Street, in Dublin, to prostitute myself, I steeled myself against my sense of revulsion and replaced it in my mind with the abundance of images I’d seen in music videos and films that depicted women who were supposedly empowered by their sexual objectification. This was the skewed image of empowerment I bought into.

Many remarks in O’Connor’s letter struck chords with me, this one above all others: “Real empowerment of yourself as a woman would be to in future refuse to exploit your body or your sexuality in order for men to make money from you . . . Please in future say no when you are asked to prostitute yourself.”

She could have been talking to a younger me.

Rachel Moran is the author of Paid For: My Journey Through Prostitution