'Many older Irish don’t have anyone to call a friend' 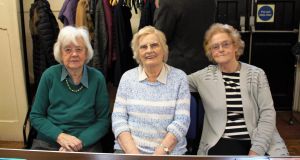 Nestled in the midst of Lower Boston Road in Hanwell west London, the William Hobbayne centre has become a “home away from home” for the older Irish community in London each Monday.

You can smell the tea brewing and the freshly baked tarts as I enter the hall, a stranger to the regulars, but greeted by huge smiles.

Hanwell social group is celebrating its 10-year-anniversary. It is the longest-running social group under the London Irish Centre charity (LICC).

It is a place for the older Irish to stay connected to their roots, to experience a morning of tea and chats, games and wellbeing and a little piece of home.

“We come every Monday, religiously,” says Veronica Power, with a sense of pride. “Hail, rain or snow. Because otherwise, we don’t get out.”

What started as a group in Ealing Town Hall has become a lifeline for a community in west London. Often known as “the forgotten Irish”, this generation  made the choppy journey across the Irish sea in the late 1950s and 1960s in search for work and a different life.

Thousands who landed repaired the wreckage that was left behind in post-war Britain.

Dermot Murphy, chairman of the London Irish Centre, says this wave of immigrants to Britain were “forgotten in all kinds of ways.”

“People lose links and lose contact with their family,” he explains, "as many of this older generation no longer have anyone left, back home in Ireland. This group is hugely important for those people.”

Wanting to meet other Irish people is what brought Kay Reynolds to Hanwell on that first day it opened. She explains how the social group filled a void that was left once the dance halls closed down.

A popular social scene among the Irish who emigrated in the 1950s and 60s, dance halls such as the Innisfree in Ealing and the Galtymore in Cricklewood, north London became an oasis of Irishness.

“It kept people together,” explains Reynolds, as she reminisces about the days of dancing up to seven nights a week “while the husbands watched the football.”

Many of the women who come to this social group are now widowed, and say the Hanwell social group gives them a reason to get up and get out in the morning.

“This place has helped me a lot. I don’t know what I’d have done without a place like this to come to,” explains Finnie Savage, who lost her husband more than five years ago. The feeling is shared. “If we didn’t have this group, where would we be?At home watching the four walls,” says Power.

Savage nods in agreement. “I don’t like my own company. I’d be very lonely. I’d be in the house on my own with nowhere to go.”

Group members chat and share photos among themselves, memories captured at throughout the years. Some recognise old faces, others point out those no longer with us.

Reynolds proudly shows me something she has cut out from the Irish Post. In the photograph she is wearing a scarf she still owns. the group is somewhere for her friends to be together, she says.

“Almost all of the women here have lost their husbands, I lost mine 34 years ago. After that, you’re looking for something to do. It gives you another life. It’s as simple as that,” she says.

Murphy and Reynolds both attended the group’s inaugural meeting in Ealing town Hall. People may think of Kilburn and Cricklewood as very Irish areas, says Murphy, but he points out that Ealing had the second biggest Irish population.

Caitriona Carney, director of community services at the London Irish Centre, explains that London’s social clubs have brought together the centre’s older clients who cannot regularly attend the services they offer in Camden Square.

The social group is an opportunity to meet friends and catch up on the week’s events in each other’s lives. For some it’s a lifeline.

“Many older Irish clients don’t have anyone that they can call a friend,” she explains. “They live on their own and often don’t see another soul from one end of the week to another.

“We sometimes presume that everyone has someone, but working at the LICC has shown me that many people have no one. The clubs provide an opportunity for our community to come together and enjoy the company of others.”

Carole Fox, who runs three of the LICC social groups in London, says these groups give people a focus. “I saw something the other day that said loneliness is a killer and I truly believe that. Someone stuck at home lonely just looking out the window will have no focus. They’ve got nothing to get up or get dressed for. People need other people,” she says.

Smiling with a sense of fulfilment, Fox says that for some of her clients Monday afternoons at the centre in west London are the highlight of their week.

“It’s a lovely environment where they can share their culture and can be at ease with one another. I think it’s important that people can be amongst their own and feel that they’re capturing a little bit of home, just a little bit of home from home.”