Why I want to represent Irish emigrants in the Seanad

I want a stake in the future of Ireland, even if I’m currently living in London 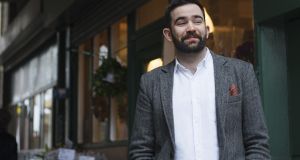 Barry Johnston: ‘The principle of extending votes to overseas citizens becomes not one of “why should we?”, but “why in the name of God haven’t we done it yet?”’

My work as a civil servant and human rights campaigner both in Ireland and abroad has been of the political world, but not in it. Over the years, I’ve been asked at regular intervals if I ever intended to get into politics “properly”.

No, was my unhesitating answer. I make my contribution from the sidelines, but I’m not a player. And besides - living in England, but from Ireland where would I run? And who would I run for?

Yet, here I am now, an Irishman in London, asking Irish people to elect me from abroad to our national parliament. I’m announcing myself as a candidate in the Seanad elections, hoping to win one of three seats on the NUI panel.

I can pinpoint my moment of conversion precisely. Walking - bouncing is probably more accurate - through Dublin airport after the weekend of the marriage referendum last May, the weight returned to my feet as I boarded the plane. Was it the usual sentimental hangover of a weekend spent back at home? The feeling, I came to recognise, was that of unfinished business.

Sure we came home to vote; those of us who could. And it was bloody great. But why should we be forced to travel for exercising such a fundamental right?

These are not just questions for emigrants. They emerge from the same questions we all need to ask ourselves about who gets to make decisions, and in whose interests; who are the insiders and the outsiders?

Ireland’s rules on overseas voting are amongst the most restrictive in the world; 129 other countries make provisions for their citizens to vote overseas, including 25 of the 28 EU countries.

Since the last election, according to the latest available CSO figures, the net exodus of Irish stands at 130,000 people, a minimum of up to 1,000 voters lost every fortnight. That’s like telling the population of Mayo it cannot vote next year. And imagine the impact that would have on the face of Irish politics?

Put this way, the principle of extending votes to overseas citizens becomes not one of “why should we?”, but “why in the name of God haven’t we done it yet?”

Living in London, cheek by jowl with the emigrants from all over the world, you see how this can work; how Irish citizens abroad would value it, and why it matters.

My US friends living in the UK are aghast at the spectacle of Donald Trump, worried for the direction of their country. They can vote against him.

Our French friends abroad are still reeling from the Paris attacks, and worried about the fallout on French society. In the next election, they can vote for a French MP for London who they can challenge to be a voice for fraternity over fear.

My new Slovenian friend, who I met at a party last week, was celebrating casting his postal vote in Slovenia’s ballot on marriage equality, the outcome of which will determine the future relationship he will have with his home country.

Perhaps being so close yet so far from home, and surrounded by so many enfranchised emigrants in London, it stings a little more. That’s why the Votes for Irish Citizens Abroad (VICA) Campaign, of which I’m a member, has found a growing base.

The Irish Government recently published its Diaspora Strategy, which includes proposals to try to attract emigrants home. While any effort to re-engage the Irish abroad are welcome, there are flaws in this approach.

In the first instance, this approach is based on a fixed notion of home and away that for many emigrants today is no longer relevant. The New-York based Irish writer Belinda McKeon has written beautifully about the new Irish “emigrants to the internet”, who exist in a space facilitated by Skype and social media, where home is not determined just by geography.

I was reminded of this as I sat with friends in a moist-eyed London cinema, sniffling our way through the film adaptation of Brooklyn. The stark choice faced by the main character Eilis, of a life lived “here” or “there”, was moving but a little more alien to my generation than those who emigrated before us.

The second flaw is more problematic. While many of us left by choice, the State has failed to address some of the hurt and resentment among those who were forced to leave or did not feel valued enough to stay; those who felt like outsiders before they left.

The Irish State needs to offer a “new deal” to its citizens abroad. At its heart, this must tackle the issue of voting rights, but it goes wider and deeper than that. It must address the social and economic drivers of emigration, which affect those who remain as much as those who have left.

On the eve of the centenary of the proclamation, such an interrogation will tell us much about how our current State is fulfilling the ideals of the Republic.

All Irish people have a stake in this regardless of geography. I’ve decided now how I want to make my contribution. I’m getting in the game. I’m home to run.