The journey #HomeToVote: selection of the best tweets 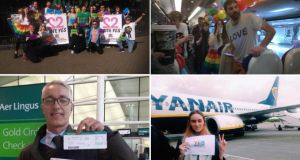 Hundreds of photos and messages have been posted on Twitter by Irish people travelling home from abroad to vote in the referendums today.

As emigrants flock back from all over the world to vote in today’s same-sex marriage and presidential age referendums, Twitter has been lit up by their photos, videos, messages and stories.

According to a Twitter spokeswoman, 48,000 tweets with the #HomeToVote hashtag were posted on the social media site in just 24 hours up to 2pm, "a significant volume of tweets from an Irish perspective". (UPDATE: this figure was increased to 72,000 in 24 hours between 5pm Thursday and 5pm Friday).

Last night, we saw photos of long queues at Dublin Airport as people wearing Yes Equality badges queued to get through the gates.

There's a monstrous queue to get into Ireland this evening. Guess what they're all back for? #MarRef pic.twitter.com/IP811asPV1

They came from Thailand…

On the way- from Bangkok airport #hometovote pic.twitter.com/NmpzHE8e1F

Flew back yesterday from Nairobi to Cork #hometovote - that's a big YES! to equality in Ireland!

I've never been so excited to get home. Sweden via Glasgow to Cork... Let's make history Ireland #YES #hometovote pic.twitter.com/6FZofCalNn

back from canada and super proud of all the people making it home to vote. Lets hope people see the best choice.#hometovote #voteyes

They travelled by planes…

Never been so happy to be at an airport gate. LGA to PHL to DUB to YES. #hometovote

Journey so far-bus, tube, train, train, flight, taxi and bus....3/4 of the way there to get home to vote #hometovote #VoteYesForEquality

Some were taking time out from important exams to travel back to vote.

Others were only back for a few hours before jetting off again.

Hozier even took time out of his busy touring schedule to pop home.

Éire! Have some hrs free, flying in to vote tomorrow. It's the most important thing you'll do. Don't forget! #MarRef pic.twitter.com/RSuR4lWTgP

And there are still more on their way, including a group of about 30 en route by train and ferry from London, organised by Get the Boat 2 Vote campaign.

Welcome back one and all.

Came #hometovote all the way from London and found my mum had made some subtle changes to my room for me #VoteYes pic.twitter.com/BOdxqXhJoN

Came #hometovote, my Dad told me to shave my beard and my Mam needs 2 months of tech advice. This better be a Yes.