‘The biggest incentive to live in Abu Dhabi is financial’

My Gulf: Tipperary teacher Brid Tierney moved to the United Arab Emirates a decade ago 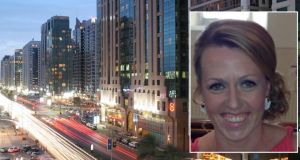 Brid Tierney: ‘Word has spread throughout Ireland that the UAE is willing to offer gainful employment to those who are skilled, educated, and willing to work hard.’ Photograph: Abu Dhabi Tourism Authority

Brid Tierney, a primary school teacher from Co Tipperary, moved to Abu Dhabi in 2004 for a short-term work opportunity. A decade later, she and her husband are still happy there, with no immediate plans to move back to Ireland.

How did you end up in Abu Dhabi?

I’m a Co Tipperary native and I moved out to Abu Dhabi in August 2004. I took a year’s career break from teaching in a primary school in Limerick city. The move was an exciting chance to travel abroad, experience new cultures and work at the same time. A year turned to two, then three… ten years later and I still find it hard to believe I left Ireland over a decade ago.

What employment opportunities are there for public sector workers in the UAE?

When we first arrived here we were among a small crowd of Irish making what we thought was a short term move to the Emirates. At that time, teaching in private schools and nursing in local hospitals were the main employment opportunities. If you had a college or university degree and your first language was English then you were a very employable person in a school, while Irish nurses were held in very high esteem in the established hospitals here.

Today there are fewer Irish nurses employed in Abu Dhabi. On the other hand, Irish teachers are very much in demand. There has been a huge upsurge in the numbers of qualified Irish teachers being employed and this is due, mainly, to an initiative being implemented by Abu Dhabi Education Council (ADEC).

ADEC is the governing body for educational institutions in the emirate, which seeks to improve the level of English being taught in government primary and secondary schools across the region. Teachers are placed within these schools, both in the city and out in the desert, and for many it is a very challenging and slow changing system to work in. Teaching in private schools is more systematic and structured, with routines easily set and maintained.

What about opportunities in other industries?

While the global economic downturn saw a huge decline in construction worldwide, Abu Dhabi continued to grow upwards and outwards. Many Irish engineers and construction managers are employed on island projects, residential and retail projects and other initiatives along those lines. These skilled individuals take charge of such projects in mainly managerial roles.

What are the financial benefits of working in the region?

For anyone employed on an overseas contract the benefits are many. Housing is provided in the form of an apartment or an allowance, furniture too. Bills are minimal with the cost of electricity, gas and water very reasonable. Obviously living in an oil-producing country means running a car is quite cheap. Tax free wages allow many an opportunity to save a little, travel extensively and still have enough left over to live a very comfortable life. Employers provide health insurance and a return flight home on a yearly basis. Families can avail of a decent private education system too.

For the Irish working in the United Arab Emirates, there is a long list of social perks to be enjoyed. Obviously the weather is a huge attraction; suffice to say, few of us suffer from seasonal weather woes. You can spend your weekend on the beach, enjoy a Friday brunch with friends, or visit the ever growing number of theme parks and shopping malls. People tend to travel back to Ireland more frequently now than they did when we first arrived, thanks to direct flights provided by many airline carriers in the region.

Are there many Irish people living there?

We have a thriving and active GAA club here called Abu Dhabi Na Fianna, one of the biggest and most successful clubs in the Middle East and Asia. It welcomes huge numbers to training three times weekly, with about 100 to 120 ladies and 60 to 70 men training and playing hard. You know it’s a small world when club players from home meet on a Gaelic pitch in Abu Dhabi, and those same players have met competitively at home in club and inter county matches, often regaling their peers here with tales of clashes on and off the ball. The fact that we compete in GAA tournaments throughout the Middle East and in Asia is testament to the numbers of Irish playing ball out here.

Word has spread throughout Ireland that the UAE is willing to offer gainful employment to those who are skilled, educated, and willing to work hard.

Do you plan to stay in Abu Dhabi long-term, or would you like to return to Ireland to live?

My husband, Declan, and I (we met out here and he is a Tipp native too) would love to move home to Ireland where family has come to mean even more to us both since we’ve lived abroad for so long but it just isn’t a viable option for us financially anymore, especially after wage cuts in the public sector. The biggest advantage to living and working here is the financial gain, the one thing Ireland is unable to offer at the moment. Weather and lifestyle are added bonuses.

Brid Tierney is a former president of the Abu Dhabi Irish Society, irishsocietyabudhabi.com