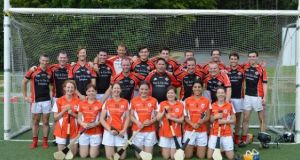 All roads led to Maastricht last Saturday for the pinnacle of the European Gaelic football season. In 21 degree heat, I had the pleasure of playing in the Pan European GAA Football Finals with Holland Ladies.

Around 450 players from 32 teams descended on the football fields in the Netherlands to play across three championships: senior men’s, ladies and men’s intermediate. The tournament was open to any GAA team in Europe where the sport is now growing at a fast pace, with seven new teams introduced in Europe this year alone.

I moved to Amsterdam three years ago to work with Tourism Ireland and was immediately introduced to the local GAA club, Amsterdam GAC. Here I found a new hobby, a new community and met a fantastic group of friends, with which I have had some of the best days of my expat life.

The club encourages and welcomes all new members, whether they are Irish with GAA experience, or a foreigner who has never heard of the sport. Despite having been to many hurling and football matches, I had never played either before except a kick around in the back garden in Galway, so it was strange to start playing GAA for the first time in Amsterdam at 27 years of age.

Amsterdam GAC was founded by a group of Irish expats on St Patrick’s Day 2003 and since then it has evolved into one of the biggest and best GAA clubs in Europe. Holland Ladies was established in 2006, and together they have played a major part in the social, cultural and personal development of hundreds of expats in the Netherlands, both Irish and non-Irish.

Joining an international GAA club with players from Derry and Germany, Cork and France, Dublin and Canada, has given me a connection with home, but more importantly, a strong sense of pride in seeing foreigners embrace both Irish culture and our national sports. This same feeling is reflected in other GAA clubs across Europe.

As at home, training sessions are run by volunteers, many of whom are players themselves, and fundraising events are held to fund our season’s tournaments across Europe. These are organised by the European county board, the host clubs and a group of enthusiastic volunteers. These tournaments are a great experience, from the training and the road-trip, to the hurling, football, goals and points, the losses and the wins, the ham sandwiches, the sing songs and the clubs’ interactions with one another.

Everyone feels a strong connection with Ireland, and as a player I feel proud to embrace our national sport abroad and play a part in its expansion in Europe. There is something a bit surreal when you first hear a team calling to each other in German or French across the pitch, or when the player you are marking introduces themselves in an Australian accent.

One of the best things about GAA in Europe is that it truly is an international community. Thirty nationalities were represented in Maastricht over the weekend, and together they displayed a high standard of football. There was a strong sense of community as players watched from the sidelines, supported each other and made connections from home.

The players rested in the sun between matches and drank beers from the clubhouse in the latter part of the day. After some fantastic matches and many close results, Belgium GAA secured both the senior men’s and ladies championships, while Amsterdam GAC won the Intermediate championship.

As the teams gathered for the evening meal and music, presentations were made by special guest, Uachtarán an GAA, Liam O’Neill. He described the finals as “on par with any GAA tournament in Ireland, or anywhere in the world” and expressed his delight at attending, saying “there is a huge future for GAA on this continent.”

After we sang and partied the night away, the cups made their way back to their respective countries. The hundreds of players, coaches, referees, board members, volunteers and supporters took to the roads home for their post-season calm before making a fresh start again in February 2015.

It makes me proud to play GAA abroad. It provides a means for expats to embrace Irish culture and encourage others to do the same. While playing the great games of Gaelic football and hurling, we can promote our traditions in communities where they are sometimes unknown.

Home is never too far away when you’re holding a gaelic football.

For more about the international spread of the GAA, see Global GAA: 65 teams, 18 countries, 180 matches – welcome to Asian Gaelic Games

Five ways to enjoy a heatwave outdoors during lockdown, without breaking the rules
Real news has value SUBSCRIBE