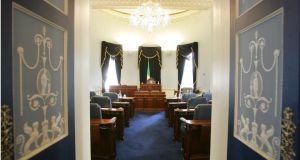 ‘One of the most compelling arguments for retaining Seanad Éireann is its potential to offer a political platform to those parts of Irish society under-represented in Dáil Éireann.’ Photograph: Alan Betson/The Irish Times

Twenty years ago, Fine Gael and Labour committed to a programme for Government promising emigrant representation in Seanad Éireann. The aim was constitutional reform of the Upper House and the creation of a directly elected panel of Senators for those abroad since the 1980s.

In this context, it’s particularly disappointing that today’s inquiries into Seanad reform are so limited in their scope - so unambitious compared to several decades prior.

When the electorate rejected abolishing the Seanad in 2013, the Government promised reform. In December, the Taoiseach established the aptly named Working Group on Seanad Reform to this end.

However, this eight member panel, chaired by former Fine Gael Seanad leader Maurice Manning, can issue only non-binding recommendations and must operate within a very limited scope. Any potential changes must work within the existing constitutional framework, meaning that real, structural reform of the Upper House - the kind of reform that was tabled in 1995 - is categorically off limits.

As co-founders of a campaign for emigrant voting rights, We're Coming Back, these limitations are deeply disappointing. Along with other organisations that advocate for democratic reform, we submitted proposals during the Working Group’s public consultation process that ended last Friday, frustrated by the narrow terms of reference.

When the Government attempted to abolish Seanad Éireann, they did so on the grounds that it was superfluous to Irish society. Where is the consistency in making such an argument only to bar the current Working Group from considering constitutional amendments that would endow it with greater independence and a more critical perspective?

The current system protects the institution of the Taoiseach’s nominations to the Seanad, which strengthens Government representation and undermines our bicameral system. Despite this, reform that would decouple Seanad elections from Dáil elections, or introduce directly-elected panels are not open for discussion.

This legislative-only constraint seems to have little democratic value - why block broader attempts to return legitimacy to our vocational chamber? Why establish a more conservative position on reform than the one held in 1994?

Representation for the under-represented

One of the most compelling arguments for retaining Seanad Éireann is its potential to offer a political platform to those parts of Irish society under-represented in Dáil Éireann. In order for this potential to be realised, the current panel system, enshrined in Article 18 of the Constitution and thus off-limits for the current Working Group, would need to be revised and completely overhauled.

Over 250,000 Irish citizens emigrated since the economy crashed in 2008 and unemployment surged. A democratically elected emigrant panel would offer them some credible representation, recognising them as citizens with a continuing stake in the Irish political process. Similar panels could offer an outlet for other marginalised groups whose views currently go unheard in our democratic system.

These are the kind of options that were once considered within the remit of endless sub-committees, review groups and commissions. Today, instead of attempting to implement past promises or any of the 11 official reports already tabled on Seanad reform, Enda Kenny has wound back the clock and restarted the cycle.

The strictly bound scope imposed on the upcoming review is so limited that we can probably look forward to another 20 years of promises, debates and reports on potential avenues of inquiry before anything is done to render Seanad Éireann legitimate.

Conor O’Neill and David Burns are founding members of We're Coming Back, an organisation representing recent Irish emigrants which campaigns in favour of extending voting rights to Irish citizens living abroad. Follow them on Twitter @WCBIreland and on Facebook facebook.com/WCBIreland.

Róisín Ingle: Oh, the Tinder tales my friend can tell even through a pandemic
4