Children with Irish roots invited to Ireland for summer camp 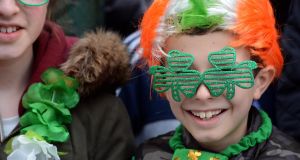 On a new summer camp programme, children of the Irish diaspora will ‘learn about the country’s history and to experience the modern face of Ireland’. Photograph: Eric Luke / The Irish Times

Children with Irish connections living in the US will be invited to Ireland next summer to participate in “an orientation course on what it is to be Irish”.

Speaking on the second day of the Global Irish Economic Forum at Dublin Castle, Minister of State for Diaspora Affairs Jimmy Deenihan said the pilot summer camp programme will be open in 2016 to high school students aged 15 to 17 living in the US.

Over the course of two weeks, the teenagers will travel around Ireland to take part in a series of educational and cultural activities, “to learn about the country’s history and to experience the modern face of Ireland”.

The “Fréamhacha” (meaning roots or heritage) programme is closely based on the Israeli Taglit-Birthright scheme, which has seen more than 400,000 young Jewish people from around the world visit Israel over the past 15 years.

Mr Deenihan said the programme would “allow the next generation of the global Irish to connect with the country of their ancestors”.

The Department of Foreign Affairs, which is funding the scheme, plans to expand it to children living in countries outside the US if the pilot is successful. Details on how to apply will be published next month.

Mr Deenihan announced the opening of a new Global Irish Media Fund, which has been set up to support media outlets in Ireland and abroad to tell stories about Irish emigration and the diaspora, and the impact of emigration on those left behind.

“The Global Irish Media Fund will encourage quality reporting of all aspects of the Irish emigrant experience,” he said.

“The successes and the challenges of our emigrants, both recent and distant, are of interest to Irish people and the Department of Foreign Affairs and Trade wishes to facilitate more reporting of these stories.”

The deadline for applications for the Media Fund is January 15th, 2016.