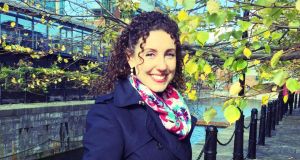 Maura McElhone: “For me, forever abroad was not an option. It might have taken me some time to see that for myself, but I eventually did”

I run the Maynooth-Leixlip stretch of the Royal Canal Way most Saturdays. Passing under Pike Bridge and by the entrance to Carton House, the crunch of gravel under foot is rhythmic, like the ebb and flow of the water alongside.

Home nearly three years now, my anchor firmly dropped, I barely recognise the girl who, a decade before, was considered “lost” to the tide of emigration.

I was studying in San Diego at the time, and during a brief visit home, had gone to Mass with my family. As we left the church, I was regaling an elderly parishioner with anecdotes from my life in California when she took my father by the elbow and said to him: “You’d better watch out: you could end up losing her to the States.”

“I think I already have,” he said.

True, I emitted all the signs of someone who had been “lost”. I raved about the weather, the beaches and the feel-good vibe of San Diego. I did pilates, ate sushi and got blonde highlights in my hair. As embarrassed as I am to admit it now, during that first year away, I even picked up a hint of an American accent.

In those younger, selfish years, perhaps I was a little bit lost, caught up in the novelty and the sparkle of it all.

But I never shook the belief that Ireland was home. Nor, some might argue, did I make any real effort to. As time went on, I only strengthened my ties, calling home every other day, Skyping at the weekends and making a point of visiting two or three times a year.

I would spend a total of six years in the US before making the permanent move back in February 2014.

I was fortunate in that regard. Things changed, of course, but for the most part, the changes were positive. Friends got married and started families. Siblings graduated and started lives in new cities.

If anything, life did the decent thing, waiting until I was back home before it really picked up the pace.

In the 2½ years since my return, I’ve lost a wonderful uncle to motor neurone disease and another to cancer. Heart problems, miscarriage and life-altering, though thankfully not life-ending, illness have reared their unwelcome heads amongst those I love.

Throughout it all, I have found myself thinking: “Thank God, I’m home.” Here, I’m only a bus, train or car journey away from those affected, and the support network we need to help us cope with such tests of faith.

Indeed, gratitude has been a recurring theme since my return. When I moved to Dublin in 2014, I rented a tiny studio apartment on Rathgar Road. I remember the silence in the June of that following year as mourners gathered at the Church of the Three Patrons for the funeral of Niccolai Schuster. I spent my final two years as an emigrant in the San Francisco Bay Area, and Berkeley was a city I visited often. I had that in common with the six who lost their lives so tragically.

On that day in June, I was reminded of just how fortunate I am to have had my time away and been afforded the safe return and gift of a new chapter. There is a desire to make the most of it and to take nothing for granted about the people and the country that I missed every day that I was gone.

Others have asked how I knew when it was time to come home. On deliberating why people write, the author and former teacher of mine, Mike McCormack, once mused that we write to free ourselves of the ideas that grip us.

Throughout those six years in the US, “Ireland as home” held fast. I enjoyed my time abroad but there was a constant niggle that every text message, Facebook update or video call only served to exacerbate my emotions as my heart wrestled with what my head had chosen. I needed to free myself from it.

My boyfriend recently asked if I had ever regretted it. I replied without hesitation: “No.”

I am working, I am writing, I see my family regularly, and I am in a relationship with a good man. I have my happiness and my health. There is a fullness to my life here and a sense of belonging that I never quite found in the US. I feel settled now without having settled.

These things combined have contributed to a different understanding of what constitutes “home”. No longer confined to the physical, home, to me, is a feeling and a state of mind. When just “being” is easy; when you willingly and naturally invest more time in living the life you have now than missing the one you left behind. When you can celebrate good news wholeheartedly and manage bad news with strength, perspective and support. Then, you are home.

The tide of emigration is turning, yet not all who left will come back. Each emigrant has their own story to write, and many of those who went away will find or make a new home elsewhere.

For me, forever abroad was not an option. It might have taken me some time to see that for myself, but I did, eventually, and now I’m right where I should be. No longer lost, very much found.