Flying nuns to Olympic coaches: 100 years of the Irish in Kenya

To mark the Rising, an exhibition looks at the Irish contribution to the East African state 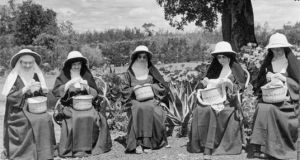 Irish Carmelite nuns in Kenya in the 1930s 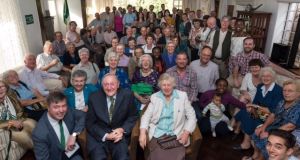 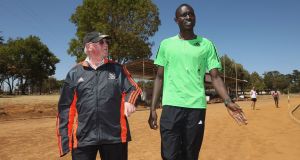 As we step out of the airport into the bright Kenyan sunlight, it is hard to believe the ruddy-cheeked Cork man who has come to greet us used to coach double Olympic 800m gold medallist and world record holder David Rudisha.

But we haven’t flown from Nairobi into the Great Rift Valley just to hear his remarkable story. We are on a mission to document the wider history of the Irish in Kenya.

The journey here began in January at a dinner in the home of Dr Vincent O’Neill, the Irish Ambassador to Kenya.

O’Neill, who had reopened the Irish Embassy Nairobi in 2014, invited representatives of the Irish and Kenyan communities to explore how the embassy could commemorate the 1916 Rising.

So, four members of the Kenya Irish Society – myself included – formed a group to research and document the history of the Irish in Kenya since 1916.

How could we capture the stories of the many entrepreneurs, teachers, doctors, coaches, aviators, farming and motoring pioneers, workers in non-governmental organisations and especially missionaries – both religious and lay?

Soon, we were inundated with documents, photos, oral accounts and official records detailing the adventures, hardships and contributions of the Irish in Kenya over 100 years.

These came from all sections of the Irish community: the Irish embassy, the Kenya Irish Society, Irish religious, Irish NGOs, and Kenyans who worked with, were educated by, and who were friends of the Irish people.

The Irish had helped to develop coffee as a major commercial crop for the country. They had built schools and colleges that are still at the forefront of education in Kenya.

One long-time resident, Dr Denis Burkitt from Fermanagh, had first described a form of childhood leukaemia, Burkitt’s lymphoma, which is a globally recognised condition today.

Cork man Richard F O’Connor was central to the birth of aviation in Kenya in the 1930s, when Aer Lingus assisted in the establishment of Kenya Airways, one of Africa’s leading airlines.

One journey took us to Turkana in northwest Kenya. In the 1960s, it had played host to perhaps the world’s first flying nuns.

The Medical Missionaries of Mary Sisters used to pilot flimsy two-seater aircraft over a desert of 51,000sq km. These brave Irish women brought the only available medical assistance to famine-stricken areas, flying in an aircraft with a fuselage wrapped in Irish linen.

We learned about 17-year-old Dolorosa Waldron, who had fled her clerk’s desk in the GPO on Easter Monday 1916 on the advice of the rebel garrison.

“Will you run home child to your mother,” she was told.

Years later, she took the arduous journey to Kenya as a Mercy Sister. She later founded the Mater Hospital in Nairobi, the first Catholic inter-racial hospital in Kenya and now one of the country’s leading health institutions.

Sisters in the Loreto Convent Msongari in Nairobi – some of whom are in their 90s – told us of Cumann na mBan executive council member Florence O’Sullivan, who became Sr Teresa Joseph and established the first Catholic high school for Kenyan girls.

There are almost 1,500 Irish people living in Kenya today.

Derek Roulston, a Donegal seed potato farmer, came to Kenya through the Presbyterian Global Mission. He works at the forefront of potato development, an important food source for the country’s expanding population.

Many of these stories are represented in the 100 years – the Irish in Kenya exhibition. Hundreds of Irish and Kenyan friends attended the National Museum in Nairobi for the recent opening by Minister for the Diaspora and International Cooperation Joe McHugh, and Kenya’s popular first lady, Margaret Kenyatta.

She said the “century-long relationship between Kenya and Ireland has been based on generosity, kindness, service, mutual respect and appreciation”, and spoke of “our common cultural histories in the arts and music, of our outward facing and embracing curiosity, and our similar commitment to sport”.

The Irish stood tall that night in the knowledge that the contribution had been recognised.

100 Years – the Irish in Kenya is on display at the National Museum in Nairobi for the month of December. It will be exhibited in Ireland in 2017.