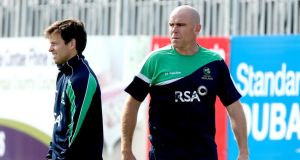 Ireland have named 36 players in two squads ahead of a busy winter programme. The established senior players make up the 13-man national performance squad, while 23 players are named in the emerging player squad as Ireland plan ahead towards the 2015 and 2019 World Cups.

The emerging group includes 10 players capped at senior international level and draws heavily on performances in this summer’s Interprovincial series.

Two interesting selections come in slow bowling all-rounders James Cameron-Dow, a 23-year-old South African-born left-arm spinner who plays with North Down and YMCA’s 25-year-old Simmi Singh, one of the standout players in Leinster cricket since his arrival from India.

The Ireland senior team will depart for the United Arab Emirates early next month to prepare for the World Twenty20 qualifier and also take on Afghanistan in the final of the Intercontinental Cup in December.

Another winter tour is being finalised for January and early February, while an A tour to a full member country is also being planned for January.
l Squads in Results round-Up

0:50 'There is no excuse any more' - animal welfare activists protest at Dublin store