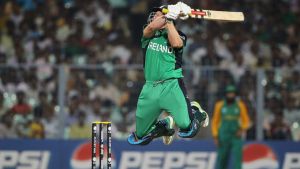 Ireland moved within sight of a place in the 2015 World Cup today as they won the first of two qualifiers against the United Arab Emirates by five wickets in Sharjah.

The result sees Phil Simmons ’s side go four points clear of Afghanistan and Scotland at the top of the table, with Wednesday’s game against the UAE still in hand.

A disciplined bowling display saw Ireland restrict the hosts for 165 and backed up skipper William Porterfield ’s decision to put the hosts in on what has proved a superb batting wicket in Sharjah.

After a blistering start to their reply, Ireland suffered a wobble in losing their top four batsmen for 20 runs, but an unbeaten stand of 62 from the sixth-wicket pairing of Gary Wilson and John Mooney saw their side home with a full eight overs to spare.

Surrey wicket-keeper Wilson finished on 72 not out, while Mooney showed that he has returned to both form and fitness in fine style with an unbeaten 23.

Earlier, Ireland’s bowlers kept a vice-like grip on the UAE batsmen, with Alex Cusack taking three wickets for just 21 runs from his 10 overs, while left-arm spinner George Dockrell ended with figures of two for 15 from his eight.

A victory in Wednesday’s second game would extend their lead to six points with an away double header to the Netherlands in July before the final two qualifiers against Scotland at Stormont at the start of September.

The 2015 World Cup will take place in Australia and New Zealand, with the top two teams from the qualifers going through automatically. They will be joined by two other non-Test nations following a final qualification tournament.