Why is Ireland so badly served when it comes to theatre for children? 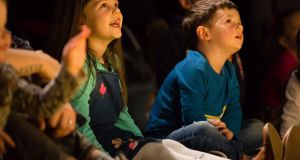 Lucy is eight months old. She attended her first theatre production at just seven weeks, where she was serenaded by an angelic trio of female vocalists, who further mesmerised her with soft cloths and twinkling lights. At the National Gallery of Ireland, she knows the route of the monthly Buggy Tour well, and has torn and eaten paper with her peers at their regular Early Years art workshops. She is an active member of the Baby Book Club at her local library, where stories are brought to life with interactive drama techniques. It is possible to live a cultured life in Ireland these days even when you are only an infant.

This month Lucy was just one of hundreds of small spectators who attended the Wide Eyes Festival in Galway, a symposium for the performing arts dedicated to Early Years Arts. The festival was the culmination of a four-year project initiated by the Small Size Association, a European network of 17 Early Years Arts organisations dedicated to promoting the performing arts for children aged 0 to six.

Behind that impetus is a mission to highlight cultural citizenship as a fundamental human right for every child, as enshrined in the United Nations Convention on the Rights of the Child. Participants in the Wide Eyes initiative met at least once a year since the project began in 2014 to explore creative processes and share ideas. The central goal for each partner was to devise and present a new work for an Early Years audience at a dedicated festival in 2018.

Roberto Frabetti, founder of the Small Size network and artistic director of Bologna’s La Baracca Theatre, is keen to insist that the festival was not conceived “as a promotional project just to show performances. It is an opportunity to share perspectives and ideas about art for young children.”

Making work for very small people is different from creating work for an adult audience, he explains. “For adults, they understand the conventions of engaging with art. They will sit and listen and applaud. For children, there are no conventions. You will open a door for them and they will follow you; or if it is not interesting to them, they will not.” Sharing work with fellow theatre-makers and young audiences, he says, is crucial research; essential groundwork for ensuring children will use the portal that a performance offers them to connect with their own creativity.

Aislinn O’hEocha is the executive artistic director of Baboró International Arts Festival for Children, which hosted the Wide Eyes festival in venues across Galway city. O’hEocha has spent the past four years attending Small Size events and this has given her a broad perspective on the diversity and vitality of work being produced for very young children in Europe. “It is very much part of the theatre tradition in mainland Europe,” she observes, “that you are never too young to enjoy and experience the arts.” She cites a trip to Nuremberg, by way of example: “It is a small city by EU standards, but it has four different theatres dedicated to children; four separate spaces with resident companies that are open year round. It is just astonishing. In the whole of Ireland, we don’t even have one [dedicated theatre for young people].”

By comparison, O’hEocha says, Ireland is “definitely under-served”. The Ark, a children’s cultural centre in Dublin, operates year-round as a venue, but its programme crosses all art forms, and most of its theatre and dance work is produced by international rather than Irish companies, while Baboró itself draws the majority of shows for its annual festival in October from the international touring circuit.

There are several organisations – among them Replay, Barnstorm and Graffitti – that embrace Early Years audiences as part of their remit, and young companies such as Ceol Connected, Bombinate and Collapsing Horse are experimenting with ways to create engaging live performances for children under six. However, Ireland does not have the tradition of bringing children to the theatre that is found elsewhere in Europe, so it has been slower to develop performances aimed at the very young. As O’hEocha explains, there needs to be a culture shift, as well as increased investment in the arts for Early Years, for the sector to truly thrive.

“The two things go hand in hand: the better supported artists are, the more opportunity there is for people to see the work. The more people see the work, the better the work will be. You can’t just put a show into a regional venue and expect people to come and see without any context for going to the theatre.”

Although performances for very small children are rarely longer than 40 minutes, developing work for an Early Years audience is time-intensive. As Marc Mac Lochlainn, artistic director of Branar Téatar do Pháistí, points out, “it is not just a case of writing something and putting it on. It is about negotiating relationships with the audience and finding connections with them, and that takes time. It is more like a research project, as you are always having that conversation about how your ideas will work with your audience.” It is not a matter of weeks of rehearsal, then, but years of collaboration, with both artists and the audience: what works, how does it work, why does it work?

“There are different conditions at play for the artists too, which can only be accommodated by experience. Performers – and people bringing young children to the theatre – need to remember that the audience follows, and should be allowed to follow, their instincts. It would be so weird and totally unnatural if there were 30 perfectly still two-year-olds sitting in a room together not saying a word.”

Branar has been making work for young audiences since 2001, and its new show Uoo, Mee, Weee! was the Irish contribution to Wide Eyes. Similar to many of the performances during the festival, it used familiar, ordinary materials – in this case packing boxes – to draw the audience into a world where imagination has the capacity to transform reality.

The Italian contribution from La Baracca, Una Storia Sopressa, engaged with a similar theme, using simple drawings and reams of paper to bring audiences on an adventure from the busy, lonely city to the magical moonlit countryside. Much of the work, including these two shows, eschewed language and narrative for more abstract, impressionistic landscapes that children could make their own sense of, while several dance companies used a multisensory approach to encourage children to join them in expressing themselves physically.

The interactive elements – whether an act of imagination or of active participation – were a crucial part of embodying what Frabetti calls “the invitation to participate” that drives all quality work for the very young.

At Wide Eyes, the children were delighted to accept that invitation. Just like Lucy, they were surprised and stimulated, engaged and excited by the work they saw. They laughed and clapped, observed and absorbed, and, like Lucy, after all the fun, they were ready for a well-deserved nap.

Be Flexible: Expect wandering eyes, and hands, and feet. Embrace the curiosity and chaos.

Be Brief: The value in Early Years Arts is in concision. You will have a captive audience for about 30 minutes.

Be Affordable: It costs €3.50 to go to the cinema on a Saturday morning. TV is practically free. Try to price your show competitively.

Be Inclusive: if you can’t let the children participate in the performance itself, give them the opportunity to explore the stage afterwards.