Unthinkable: Would you want to live in the afterlife? 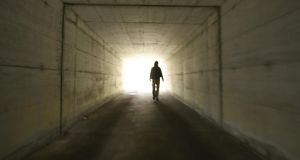 Towards light: imagine your life from the standpoint of darkness beyond it. Photograph: Thinkstock

What might life after death look like? Philosopher, novelist and former clinical neuroscientist Raymond Tallis has never been afraid of tackling seemingly impossible questions.

In his latest book, The Black Mirror: Fragments of an Obituary for Life (Atlantic Books), he approaches the notion of the afterlife by imagining the standpoint of his future corpse.

What sounds like what could have been a morbid project turns out to be “a work of praise and gratitude” as he sees the world “through the eyes of a wondering love that I feel I should experience less intermittently”.

Firmly back in the land of the living, Tallis provides today’s wondrous idea: “We die because we are improbable.”

Thinking about death is deeply unsettling. So why not blot it out of one’s mind altogether?

“The quote from EM Forster that stands at the head of The Black Mirror says it all: ‘Death destroys a man; the idea of death may save him.’ To which one might add, while we cannot waken the dead, the dead, and the idea of ourselves among them, may waken us.

“By endeavouring to see our lives from the imaginary standpoint of the darkness beyond them is to make the shining hour shine more brightly. And this is the point of the other quotation at the beginning of the book: Lucem demonstrat umbra – the shadows show forth (or highlight, perhaps) the light. To live with the possibility of death in the forefront of your mind is to make ordinary daylight the fabric of a vision. And to make it more precious: ‘To love that well which thou must leave ere long.’

“If there is such a thing as being in love with life, I have felt it even more strongly since I started writing this book.”

Does reflecting on one’s mortality lend itself to conclusions about morality? For example, does it help to promote empathy with other beings?

“It should do, shouldn’t it? In reality, it is very difficult to dismount from natural self-centredness or, more commendably, the narrow preoccupations necessary to deliver on the responsibilities of everyday life. One moment you are poleaxed by the knowledge that you are a mere eye-blink in eternity and the next you are furious because someone has nipped into your parking spot when you are hurrying to run a clinic for which you are late.

“Even so, I would hope that reminding ourselves of our mortality might make us less relentlessly egocentric in pursuit of aims that are, in the long run, transient.”

I was struck by the passage when you described how “towards the end of life” you had more sympathy to those building battleships made out of matchsticks and other such pursuits. Does the “meaning of life” change when you adopt “the view from death”?

​“When I was young, I was impatient with the way my fellow human beings seemed to squander the gift of life on trivial pursuits. Why waste time on trainspotting instead of trying to make the world a better place or to understand it better? Now, from the standpoint of one whose life is largely in the past, a place from which it is clear that all purposes large and small end in purposelessness, I can see that the difference between the empty and the serious is not so clear-cut or absolute.

“There is something admirable in the search for perfection, or completion, however small its object, however pointless it may seem to be.”

How does the “gap in our understanding” of human consciousness, as you describe it, affect your view of the afterlife?

“We cannot understand the relationship between consciousness, the material world we are conscious of and the material body that makes it possible for us to be conscious. This is not just “a little local difficulty”. It is, or should be, a reminder of how little we understand the place of our minds in the cosmos.

“So, while I am an atheist – for many reasons, including the fact that all ideas of God I am aware of, where they are not actually self-contradictory, are deeply compromised by their origin in all-too-human humanity – I have a sense of unbounded possibility. Given that the origin of our embodied consciousness is deeply mysterious, it is appropriate to acknowledge that we have no idea of its destination.”

Will RT continue in another form after death?

“Quite a lot of people are, I suspect, sick to death of Raymond Tallis (aka RT), but I can’t get enough of him and, so long as I am well and Mrs RT is above ground, I have no desire to bring his story to an end. Unfortunately, I can’t think of any way RT might continue after he has been committed to the flames in the local authority crematorium.

“Would he live on in the minds of others? The idea of being RT’d (or retweeted) forever in other’s memories is, alas, wishful thinking. The living are too busy living their lives to curate his memory in any organised way or even to construct or retain an image of him that he would recognise. Besides, the competition for attention from countless rival dead is fierce. What’s more, it will not be long before everyone who knew or knew of him will themselves be dead, and be relying on others’ memories to uphold their posthumous existence.

“Resurrection of the flesh and an embodied afterlife in some other place seems unlikely. It would be a formidable task to piece RT’s ashes together. The alternative – an afterlife in disembodied form – might be a bit dull. Without his body, RT would have no location in space or time, no needs or appetites to service or other sources of an agenda, only a fading past to look back on, and no future to look forward to. Lunch, sex, philosophy and gossip would all seem to be off the menu. And he might find the company a bit dull. According to Plato, mathematical entities are eternal. Imagine having the square root of minus 1 for a neighbour. An hour in such an eternity would seem like – well, eternity.

“So, I can’t rule out the possibility of an afterlife for RT but I cannot imagine what form it might take. And I can’t think of a particularly attractive one.”