Unthinkable: Why should men care about gender inequality? 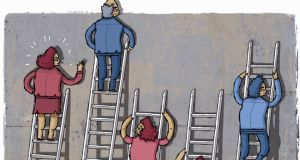 ‘Many “nice blokes” are simply naive, and don’t know the statistical data on the poor representation of women in philosophy’

Gender inequality in academia has been at the centre of much attention lately. Figures from Irish universities show 53 per cent of undergraduates but only 19 per cent of professors are women.

Various initiatives have been set up to combat this but there is resistance too. There is grumbling among men in academia that they are being turned into “bad guys”. Behind this resentment is an underlying philosophical question: why should men care about gender inequality?

Ian James Kidd, a postgraduate researcher at Durham University’s department of philosophy, argues that many men fall into the “nice blokes” trap; they “cheerfully and confidently deny” sexism even as it’s happening in their presence. Kidd, who attended a recent Dublin workshop of the Society for Women in Philosophy Ireland, thus provides today’s idea (or rallying cry): “We have to make denial and inaction over gender bias morally and professionally untenable.”

How can ‘nice blokes’ be sexist?

“Many philosophers – men and women – fall into the ‘nice bloke’ trap. Confronted with such reports, they’ll insist

they are not sexist, they don’t discriminate, their department is friendly and welcoming. And they justify this by supposing they and their colleagues are ‘nice blokes’, fair and inclusive and egalitarian.

“These philosophers might accept that there are ‘horror stories’ from elsewhere, but still insist that, on the whole, most philosophers are nice blokes, so the reports must be exaggerated.

“Many ‘nice blokes’ are simply naive, and don’t know the statistical data on the poor representation of women in philosophy. They do not read the blogs, study the reports, or speak to women about their experiences.

“Other ‘nice blokes’ presuppose that they can gauge how ‘warm’ a climate is for women. Many women report their department has a ‘chilly climate’. A good example is the familiar phenomenon of a woman making a point during a discussion; it’s ignored and passed over, until a man repeats it, at which point it’s taken seriously.

“Many ‘nice blokes’ fail to notice this, simply because it never happens to them; they don’t feel the anger, hurt, and dismay at having their good idea credited to someone else.”

Hang on, though. Is that exclusively a female experience? Lots of men will testify to being overlooked or undervalued at work

“Men can be overlooked, too, for instance if they are under-confident and less bolshie about putting themselves forward. But the data is, again, clear that this is much more of a problem for women.

“In fact, for some women, being consistently overlooked and undervalued is a definitive fact of their professional life, not an occasional and irksome feature of it.”

What other unconscious biases are at play in academia?

“There is a huge literature on ‘implicit cognition’, the diverse range of biases, heuristics, and other cognitive short-cuts that are a feature of our evolved psychologies.

“Confirmation bias is a good example: we are more likely to notice, recall, and act on the basis of experiences or testimonies that confirm our expectations. So if you think that you’re a ‘nice bloke’, you’ll tend to notice incidents when a woman was treated fairly, rather than the many incidents when she was not.”

Accepting there is sexism in academia, why should men care any more than they should care about racism, economic inequality or any other injustice?

“Many -isms are a worry for philosophy, including sexism, racism, ableism, and classism. Men should care about all of these forms of discrimination. They’re bad for those people being unfairly excluded. And they’re bad for those who get to enter, progress through, and flourish in the profession; we are losing out on ideas, talent, and people.

“They’re bad for the vitality and health and moral credibility of the discipline. And, finally, it’s unfair and unjust and morally wrong.”

What would you say to a male head of department who says: ‘I’m the victim here; I work long hours and get little thanks, and now I’m being judged as someone who only got ahead because of my gender’

Women work long hours, too, but the data shows that they get even less credit for their work. In fact, women have to work harder to receive the same praise and credit as men. One report suggests it’s about two and a half times more (‘Nepotism and sexism in peer-review’ in Nature magazine 1997).

“And it’s an ugly truth that the implicitly biased culture of philosophy continues to give men an inside track. As a white male, I’m at the giving end of implicit biases. But that’s not a situation that I am comfortable with, given it’s unfair and premises my success on a skewed playing field.

“The head of department need not worry that he is only being judged due to his gender, since he may also be very good at what he does. But he really ought to acknowledge that gender is a factor, and that we must try to put measures in place that stop that.”