Unthinkable: Is it ethical to send your children to private schools? 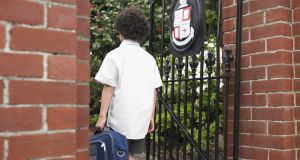 Parents who can’t afford fee-charging schools are effectively paying for those who are already privileged to go to private schools. Photograph: Thinkstock

It’s not unreasonable for students to want the best education possible but do their responsibilities end there?

By going to grind schools, or availing of academic supports that low-income students can’t access, you could be accused of propping up an unfair and class-ridden education system while advancing your own prospects.

Dr Audrey Bryan of St Patrick’s College, DCU believes so. Her research explores how students “see themselves as self-implicated in their learning, and as active participants within a wider framework of responsibility”. Thus, she provides today’s idea: “Students and their parents have responsibilities to society that go beyond getting the best results.”

“On one level, there is absolutely nothing wrong with them. These schools provide privileged learning environments, an impressive range of curricular and extra-curricular offerings, an emphasis on ‘soft skills’ in addition to academic excellence, and social networks and support systems that provide a gateway to university and prestigious or lucrative careers.

“One only has to look at the LinkedIn profiles of business professionals, or the educational backgrounds of Cabinet members to see that private schooling confers obvious advantages and that a disproportionate number of high-earning and/or high-status professionals have attended private schools. But on another level, fee-charging schools are a symbol of the wider inequality that is endemic within Irish schools and society.

“If choosing to send one’s child to a private school was a realistic option for all parents, the extent to which private schools reflect and contribute to inequality of opportunity wouldn’t be as obvious. But because we live in a society that is very unequal and stratified along social class lines, a private education simply isn’t attainable for most.

“For example, in 2014, half the Irish working population earned less than €28,500 a year, whereas fees for private schools were as high as €7,900 per annum (and considerably higher for boarders), which is over a quarter of the median gross income.

“Fee-charging schools – particularly those that cater for the power elite in Irish society – engage in highly selective and exclusionary admissions practices which exclude on the basis of religion, social class, or the inability to pay. Students who attend private schools are typically educated alongside others who are just like them, rather than in environments which reflects the diversity of the wider society.

“Social segregation is detrimental for all sorts of reasons, not least because it makes it much harder for those in powerful positions to ‘see’ their privilege, or to understand the challenges and realities experienced by those who are less privileged.”

So what should be done?

“We need to establish a universal model of educational provision based on a culture of inclusivity that actively prevents segregation of any kind, including along religious, racial-ethnic, gender, ability or social class lines.

“This would involve the prevention of explicit as well as more covert exclusionary selection practices that are characteristic of both private and some non-fee-charging schools.

“State subsidisation of private schools – a peculiarity of the Irish education system – is increasingly hard to justify in a society characterised by intensifying socio-economic inequality.

“While politically contentious, there is growing recognition of the fact that present funding arrangements result in an unfair situation whereby parents who cannot afford to send their children to fee-charging schools are effectively paying for those who are already privileged to attend schools that confer significant advantages on them.”

“The simple answer is that education cannot be viewed as a commodity or a service in the same way that other goods or services are thought of, because education is a public good whose goals are social, not merely or even necessarily economic.

“The perception of education as a market commodity is closely aligned with the principle of economic rationalism. This prioritises national economic growth at the expense of more fundamental objectives of the education system such as the promotion of human rights, human dignity and social justice – all of which are vital to the functioning of a healthy democracy.”

Should students reflect on the ethical implications of taking private grinds?

“Yes, I think they should as this is yet another aspect of the educational ‘market’ through which social inequality is produced and maintained since only those with the financial means can access grinds to secure their educational advantage. More fundamentally, however, I think students should be encouraged to reflect critically on the education system as a whole – including its emphasis on high-stakes examinations and its promotion of competitive individualism – which make private grinds necessary or perceived as necessary in the first instance.

“They should also be encouraged to reflect on the deleterious effects of a highly competitive and deeply flawed system that produces winners and losers by privileging and rewarding certain kinds of knowledge and certain types of learners, while devaluing and alienating others.

“All students should be encouraged to think about what the fundamental purpose of education should be, and how it might be more productively used to enable them to create meaning in their lives, to raise their consciousness, and to imagine the world otherwise.”

What kind of responsibility do parents have towards the education system?

“Ultimately, parents, like all citizens, have a responsibility to reflect on the kind of society they want their children to inherit as adults, and whether an educational system that promotes intolerable levels of inequality and educational injustice – as well as intense pressure and competition – is really in the best interests of their children, or indeed society’s interests, in the longer term.”

Audrey Bryan will address the theme of “Compensating for Society? (In)Equality of Opportunity and Educational Reform in Ireland since 1965” in the Cregan Library, St Patrick’s Campus, DCU, Tuesday, November 10th, at 7pm, as part of the Seamus Heaney Lecture Series 2015.

Unthinkable: Great Ideas for Now by Joe Humphreys is available to buy here.