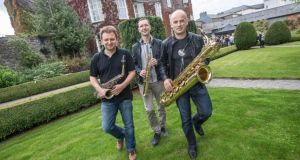 Sax Allemande get set to perform their Irish debut at the opening night of Kilkenny Arts Festival on Friday evening. The events run until August 16th. Photograph: Pat Moore.

The central theme of this year’s Kilkenny International Arts Festival may be Eternal Harmony: the Music of JS Bach, but yesterday’s opening concert was very nearly ambushed by a much more sinister noise – the sound of silence.

A harpsichord succumbed to the humidity of an Irish August and, with an hour to go before kick-off, developed a serious fault in its sound-board.

It took an hour of frantic behind-the-scenes work on the instrument before the patiently queuing punters could be allowed into St John’s Priory and Iranian-American harpsichordist Mahan Esfahani could embark on his journey through the 48 preludes and fugues of Bach’s Well-Tempered Clavier.

As the city gears up for its annual 10 days of performance, poetry, painting and debate, he added that “the buzz has been brilliant”.

But not everyone has been charmed by the direction the festival has taken this year. There have been complaints that the focus on Bach – with 19 concerts, including the mammoth Mass in B Minor and three different interpretations of the Goldberg Variations – has led to a drastic reduction in the number of visual arts and theatre events in the programme.

Downes, however, is unrepentant. “For me a really great festival offers experiences which are totally out of the ordinary – and this is a once-in-a-lifetime opportunity for audiences to concentrate on a deep, rich exploration of a particular artist,” he said.

He rejected the suggestion that the festival had been in any way diminished by its concentration on Bach.

“Poetry, whether from Druid’s mammoth production of Shakespeare’s history plays and the presence of our poet-in-residence Robert Pinsky, will weave through the programme – as will the collaborations of the Marble City Sessions, between Irish traditional artists and international musicians,” he said.

He also announced a last-minute addition to the programme in the shape of the actor Fiona Shaw, who will join Martin Hayes, Duke Special and the Cork Gamelan Ensemble for their concert at St Canice’s Cathedral on Thursday night.

This morning, Architects of Air will open their light-filled giant inflatable sculpture, Mirazozo, on the lawns of Kilkenny Castle.

The annual Hubert Butler lecture will be given this evening by Lara Marlowe, Paris Correspondent of The Irish Times, on The Age of Unreason: Nationalism and Jihad in the 21st Century.

With street theatre, a couple of operas and pop-up concerts in Kilkenny gardens, including the castle’s rose garden and the walled garden at Rothe House, there is no shortage of entertainment for all ages in the city’s medieval centre this weekend.

Meanwhile, outside the box-office on John Street, “sold out” signs have been merrily popping up across the festival wall-chart.