RTÉ archive a treasure trove of faces, voices and memories 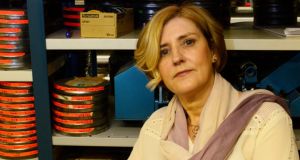 The way we were: Brid Dooley, RTÉ’s head of archives, at the storage depot in Sandyford. Photograph: Cyril Byrne 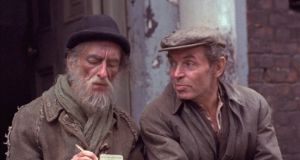 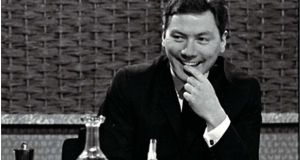 Broadcaster Gay Byrne on the set of ‘The Late Late Show’, in the autumn of 1966. Photograph: RTÉ Stills Library

In an anonymous industrial estate adjoining the busy M50 on Dublin’s southern fringe lies the country’s largest and most precious collection of Irish moving images. Inside the RTÉ Archives repository, floor-to-ceiling shelves hold thousands of metal cans of film, along with stacks of different video formats, from the bicycle wheel-sized drums of reusable two-inch tape used for programmes in the 1960s to much smaller modern digital formats.

Because this is a small country, and because RTÉ had the broadcasting pitch to itself for most of the 20th century, it finds itself sole custodian of a precious national legacy. It can be an onerous responsibility. What began as an internal library service now has the status of a national cultural institution, which raises questions about the archive’s future purpose and strategy.

“For RTÉ as a public service organisation, our mission is very explicit,” says head of archives Bríd Dooley.

“We have an obligation under the Broadcasting Act to keep our archives – we did it anyway but we’re now legally bound to do that. In terms of our strategy, we’ve now stated that part of our strategy is to develop and open up the archives. It’s about a statement of intent, a recognition that we have this amazing archive that’s essentially a history of Ireland through the lens and the microphone.”

However, resources are finite and choices have to be made. “You always apply the criteria of vulnerability, rarity and value to any assessment of what you’re going to keep,” says Dooley.

“More or less everything we have extant is valuable, so for us it’s deciding what’s most vulnerable at this point in time and making it safe.”

The challenges faced by audiovisual archives are significant. At this stage, broadcasting has been through several different generations of technology. Each time, as it moves on, it leaves behind precious material on formats which are no longer sustainable, some of them highly susceptible to degradation as they age.

The bulky apparatus is awaiting repairs. Even better, he says, would be an up-to-date scanner to do the job properly. “We’ll be getting that scanner,” Dooley assures him.

It’s not always a question of the oldest material being most at risk. The 16mm film stock used in the 1960s and 1970s for news reports is considerably more stable and durable than the videotape that replaced it in the 1980s.

That’s one of the reasons the archive is working on a project, funded by the Broadcasting Authority of Ireland, to digitise all its news packages since 1985 – 5,000 hours of footage in total. As this material becomes available, it will be uploaded to the archive’s website so anyone can access it. Another project in partnership with the GAA will see all RTÉ’s recordings of All-Ireland finals digitised.

This week in Dublin, the challenge of preserving the world’s film, television and sound recordings will be discussed at a major conference, with speakers from the world’s foremost audiovisual archives joining representatives from world cultural heritage bodies to discuss the challenges they face.

Inside the archive building, film specialist Gráinne D’alton is working through a batch of clips, noting and cataloguing their content and condition. She shows a seven-minute-long report. “It’s a press conference from the Army about an incident which took place in Lebanon in the late 1970s – I’ve narrowed it down to between 1979 and 1981,” she says. “It never went out. Most of this sort of stuff didn’t get kept, but some did, for whatever reason.”

This sort of painstaking research will always form part of an archive’s work, but the facility also deals with daily requests from producers for content. When I’m there, they’ve just been sourcing additional material for RTÉ2’s documentary marking the first anniversary of the marriage equality referendum. Old footage of Louis van Gaal is being requisitioned in preparation for reports on the football manager’s departure from Manchester United.

“We did a study into our use of archive, to see how much is used,” says Dooley. “In 2014 we came up with the statistic that 27 per cent of our news footage came from archive.” The archive also brings in some revenue through licensing content to other users.

The collection includes the logbooks of all the programmes which were erased in the early days of RTÉ.

Most of the broadcaster’s output in its first 15 years was lost because it was recorded on very expensive reusable tape. It’s an illustration of how value judgments can change within a few decades that this is now seen as a tragedy. TV then was live, ephemeral and disposable, so all the early Late Late Shows and much more got wiped.

“If you’re looking at something like Tolka Row, which was the Irish Coronation Street of its time, we only have the final episode,” says Dooley.

“In those days you did not keep programmes beyond a certain length of time, because the cost of keeping them was so great. Even when we sold material abroad, as we did sometimes in the early days – The Riordans was sold to Australia – the tapes came back when they were finished with them. That gives you a sense of the cost and the value that was put on these things at the time.

But there were selections made. A lot of the drama that survived did so because people saw there was value in it. Insurrection is an interesting example because it could only be kept by putting a film camera up to the screen and capturing it that way. Because film could be kept, but video couldn’t.”

But the most significant development for public service broadcasters now is that content can be made freely available to the public, who paid for it in the first place. The archive has had a dedicated website since 2005, but a more recent redesign to optimise mobile viewing and social sharing doubled viewing figures, says Dooley. “And that was before 1916 came along,” she adds.

“Irish people like to share. For most people it’s just content. They just say, ‘Oh, there’s Bono in 1995’. Or ‘There’s Graham Norton on a show at the age of 12’. It’s the gems in the archive that bring what we do to life. They don’t think of it as archive – they think of it as stories. And the data shows it appeals across a range of demographics, young and old.”