Patrick Freyne: The Late Late Toy Show is coming, there’s no need to be afraid

Accept no substitutes, especially those made by TV3 – The Toy Show is the alpha and omega of Irish culture 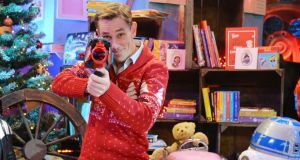 “Dance for me Tubridy,” I shout, throwing decommissioned punts at my television screen as he hoofs it up along to Hair or Hamilton or Titus Andronicus or whatever musical extravaganza he’s chosen this year.

“There he is,” I say proudly to my wife, as the Montrose lifer jigs his way towards me, flanked by a terrifying phalanx of Billie Barry stormtroopers, his child enforcers. “The man himself.”

I have lived 41 Toy Shows now (that’s how I measure life). Of course, the Toy Show used to be different. Before television, it was just a priest and a visiting relative from America showing us toys we could barely comprehend and saying: “You can’t have this. This is for children in other countries. You can have this marble and this bird skeleton.”

But Gay Byrne got involved and put the Toy Show on television and showed us a whole new world. In a way, Gay, the father of us all, treated every episode of The Late Late Show like it was the Toy Show. “Here’s a condom!” he’d say. “Or here’s an Englishman who’s written a book!” he’d say. “Or look, a Protestant!” or “Is this woman a divorcee? Let’s find out!” and he’d say it with the same air of theatrical wonder with which he might demonstrate a game of Buckaroo or show us a doll a that could shit itself.

Pat Kenny was different. They didn’t even tell Pat Kenny when the Toy Show was on. “The guests are smaller, and they’re out of control today,” he’d say stoically, before tying his tie around his head and sharpening a stick. He was a total pro.

TV3 even had a rival toy show for a while. It consisted of defrocked boybandit Brian “Bryan” McFadden “unboxing” a Twix beneath a flickering halogen light. Critics called it “upsetting” and “a show for our times”. It is no more. Now the entire TV3 facility appears as a playset on The Late Late Toy Show.

Every year the Toy Show is the same. In the Green Room, Geoffrey the Giraffe from Toys R Us and that disturbing Toymaster dog walk on their hind legs in a terrible mimicry of man and bark and make giraffe-sounds down the phone to their happy accountants. They are abominations.

Racked in rows before the stage sit a covetous slavering audience eager for free stuff. This began as an art installation called “Budget Day 2005”, but it’s taken on a life of its own since then.

If you are “old”, you will, no doubt, find new toys weird. For example, here are the toys I had as a child:

Star Wars figures with no heads (the heads were just too damn satisfying to chew).

A space hopper. Before the invention of the bike, this was how we used to go to school. That or Lolo-ball (“The Lolo Balls go by in twos and threes, there’s a dance in Billy Brennan’s Barn tonight,” as Kavanagh said).

A naked action man that made me feel funny. Where are his goddamned clothes? Why is he flaunting his body like that?

A hoop and a stick. Sometimes between shifts in the mill and picking pockets for Fagan, I’d snatch a few minutes hoop-and-stickercising. It’s how I rolled.

A Pokémon, but a live one my father snared in the wild, not a stupid electronic one.

And this year’s toys? Who knows? Here are my guesses:

A big eyed robotic chum with a fluffy face and a name that begins with the word L’il who befriends your child but seems less cute 10 years from now when it’s stealing her job.

A doll that weeps, wets itself and has the symptoms of several medical ailments but has no health insurance and will become a burden on the family.

An Elmo that knows your credit card number and orders things online when you’re sleeping.

A form of play dough made of a rare mineral found only in a now ravaged third-world country.

A Furby that feels pain and understands death and is teaching itself to speak.

Something indescribable that’s an eye-ball-searing shade of pink.

A terrible wooden toy that only parents with notions and 17th-century Puritans will like.

The Late Late Show also features all the different kinds of children:

The child who’s obsessed with agricultural machinery. His name is Murt and he is concerned about crop yields. He looks at Ryan Tubridy suspiciously as though he’s a waste of farming subsidies. This child will never pay a licence fee. “Now you’re sucking diesel,” he says, on the hour.

The child who’s amazed by and thrilled by everything. That child is adorable but you can’t shake the suspicion she’s being incredibly sarcastic.

The precocious child with a strange name who corrects Ryan on his facts. This annoys us, because that’s our job. “Leave Ryan alone, Tarquin/Grimelza/Dave!” we shout. It also annoys Ryan. “Look, you little shit,” he says, picking the child up by the collar. “Nobody corrects me. I’m the best boy in Montrose!”

The four children who still read books. Books are artefacts made of paper from “the long ago” before “the dumbening”. These poor pale, sun-deprived nerds huddle in a corner memorising each word before the Furby destroys all literature out of spite and to ease its inner torment.

The child with a worrying hobby like collecting Fabergé eggs or second World War memorabilia or Fianna Fáil manifestos. Mark my words, this is not the last time that child will feature on an RTÉ television programme.

“Are you actually competing with an eight-year-old child?” says your spouse, but they are actually quite impressed and then they demonstrate that they can dance better than those Billie Barry losers.

At some point in the show, there’s a cutaway to savage toddlers rampaging around the set like UKIP supporters in the days after Brexit. Ryan sits amidst the staggering horde thrilled with himself. “It begins!” he cries. “Destroy it all, my infant minions!”

And then, of course, there’s the annual parade of sullen children in pedal vehicles. All over the country we stand up and salute as they cross the set in formation. “Look at that, Google,” says Tubridy to the camera. “An educated, tech-savvy workforce.” The corporate tax rate flashes up on the screen.

Anyway, what I’m trying to say is: I can’t wait for The Late Late Toy Show. What toys are you getting?