Was Aldous Huxley right about our brave new world? 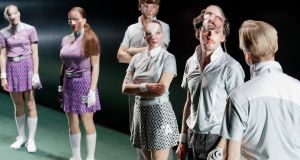 Brave New World: has our watchfulness against a frontal attack from tyrants blind-sided us to the threat from within?

A book appeared in 1930 with a fascinating, haunting idea: a pill that replaces all human concerns and inner conflict with a mood of serene conformity. The tablet, DAVAMESK B 2, was euphemistically known as the “Murti-Bing” pill after the fictional Chinese conqueror of Europe in the book Nienasycenie by Polish author Stanislaw Witkiewicz.

The book, written in 1927, sees the 21st-century planet united and enslaved under Chinese rule by a pill that prevents thinking or resistance but engenders an obsession with sex. Two years after the Polish work was published, Aldous Huxley’s Brave New World appeared. His dystopian future also foresaw the human race enslaved by a happy pill, this time called soma.

Brave New World was hailed by Bertrand Russell as “masterly” and was promptly banned in Ireland. It’s intriguing to consider what reception the book would have enjoyed had its Polish predecessor not first been translated into English in 1977. George Orwell, author of that other dystopian masterpiece, Nineteen Eighty-Four, believed Huxley borrowed heavily from another book, We by Russian author Yevgeny Zamyatin. Others see parallels with the 1932 lecture and subsequent book Daedalus by British scientist JBS Haldane.

Regardless of how original or derivative Huxley’s dystopia may have been, history has been kinder to it than to Orwell’s. As Neil Postman argues in Amusing Ourselves to Death, mankind may be less susceptible to being enslaved by an Orwellian Big Brother with a totalitarian control on information. Why bother going to the trouble, Huxley suggests, when the truth is far easier to obscure by drowning it in a sea of irrelevance? “Orwell feared that what we hate will ruin us,” writes Postman. “Huxley feared that what we love will ruin us.”

Gliding on a tram through Bonn’s streets, you don’t have to be paranoid to see why Huxley was worried. Inside, everything is silent as passengers stare vacantly at their smartphones, electronic soma pills that sedate the brain with “cats that look like Hitler” clickbait. Outside, designer furniture outlets are interspersed with fast fashion stores and sex shops.

Has our watchfulness against a frontal attack from political tyrants blindsided us to the threat from within, from what Huxley called “man’s almost infinite appetite for distractions”?

The good news is that none of the tram passengers who trooped into Theatre Bonn’s Halle Beuel venue last week fished out their smartphones for a sneak peek. Instead, for almost two hours, they were transfixed by Huxley’s future as envisaged by Gavin Quinn, director of Ireland’s Pan Pan theatre company.

In a co-production with Theatre Bonn, Quinn’s Brave New World distils Huxley’s ideas and atmosphere into an aerodynamic evening that glides along like a fleet of flying cars, manned by an expert cast of drugged-up, optimised optimists in silk outfits.

The production was commissioned by Bonn’s drama director, Nicola Bramkamp, a decade after she had caught Pan Pan’s The Seagull and Other Birds. This Brave New World production has struck a chord with audiences and, after premiering as part of a utopia/dystopia season, is playing in repertory.

This is less a retelling than a reduction, as devised by Quinn with dramaturg Michael Raab. Discarding a linear narrative saves time but also jettisons much of the novel’s drama.

What’s lost on one front is gained elsewhere, however, incorporating the audience into Huxley’s caste system of optimised, programmed people. Quinn employs clever ideas that are particularly daring in a country that endured two dictatorships in the last century.

Despite the evening’s comings and goings, a drugged-up, hazy atmosphere is maintained throughout thanks to hypnotic light and sound design by Bonn’s Sirko Lamprecht and Dublin’s Simon Schroeder respectively.

For Quinn, his production was never going to be a box-ticking exercise but a spare exploration of one of Huxley’s major themes: why the human spirit refuses to be smothered.

“No matter how much social engineering,” says Quinn, “there is something about your spirit that breaks through, that questions or at least leaves you at a loss that something doesn’t quite feel right.”

Despite reshaping and reforming the novel, the director and dramaturg make only minimal updates: replacing Huxley’s own capitalist references (“Oh Ford”) with household names of today (Google, Apple, Airbnb). The aim, Quinn says, is to jolt audiences into spotting capitalism’s penetration of our consciousness.

Quinn admits his controlled, author-driven approach was a challenge for the German cast, trained in the Regietheater or director-driven theatre tradition where, in a German director’s hands, the obvious Google/Facebook references would have been sledgehammered home. In Quinn’s hands, the audience is left to make their own connections.

Given the ongoing debate – and court actions – over Google and Facebook’s international operations in Dublin, consciously avoiding the contemporary will not please everyone.

Staying close to Huxley’s open-ended intentions will please purists, but risks the Irish-German co-production being tarred with the same “light touch” brush critics use on Ireland’s data protection regulator.

Does Quinn think the power tech tenants on Dublin’s Grand Canal Dock are building a brave new world under our noses? “To an extent, but it’s hard for theatre to question something immediately,” he said. “People can connect the dots; representing definite opinions might make the piece overtly political.”