The xx and Duran Duran to headline Electric Picnic 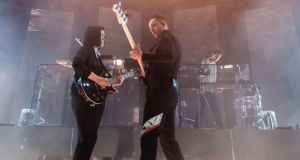 Oliver Sim and Romy Madley Croft of The xx are due to headline this year’s Electric Picnic festival. Photograph: Jakubaszek/Redferns

The xx, Duran Duran, Chaka Khan and A Tribe Called Quest are among the main headliners at this year’s Electric Picnic festival.

Among the other main acts on the bill are Interpol, Run the Jewels, London Grammar, Madness and Father John Misty. Annie Mac and The Divine Comedy are among the Irish acts on the lineup

A version of the festival lineup had leaked on social media hours before the main announcement. The festival also sold out within minutes of going on sale. At approximately 9.05am, anyone coming to the Ticketmaster site was told that tickets were no longer available. Some fans who were on the site earlier and stayed in the online queuing system were able to secure tickets. The majority of the tickets had been sold in pre-sales.

Electric Picnic weekend tickets were almost immediately available on the secondary ticketing sites Seatwave and Viagogo. These ranged in price from €320 up to more than €500. The original ticket price is €240.

‘The beaches are open and people are having a wonderful time’: Why Jaws is still so scary
8