The Spinning Heart review: an ensemble performance of an atomised community

In director Paul Brennan’s staging of Donal Ryan’s novel, each performer is given an uncontested moment to shine 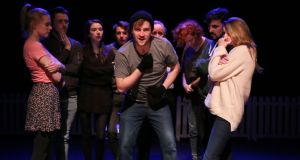 The Spinning Heart , at the Smock Alley Theatre, Dublin

“It’s difficult living in a universe with a population of one,” confides one of the more confused characters (a try-hard solipsist), in Donal Ryan’s debut novel, The Spinning Heart, from 2012. The technique of Ryan’s book, though, with its population of 21 characters, is to let everyone become the centre of the universe. Each is allowed a confessional story, told in the first person and in quick succession, which piece together to form the striving narrative of a recession-era Irish town. For the divided families, betrayed workers and squinting neighbours, those circumstances match the manner of telling: everything is turned inside out.

In Articulate Anatomy’s staging, however, everything is pretty much left alone. Delivered as a series of monologues, this is less an adaptation of the novel than a supple edit. In a scrupulous display of even distribution, 10 performers share 20 roles (just one has been sacrificed), inhabiting a stage of white chairs and picket fences, elegantly lit by Eoin Lennon, that says as much about the economy of the production as the nation.

If director Paul Brennan’s staging often plays like a suite of audition pieces - bright, eager and declamatory - there’s good reason: the production started as an acting school showcase. As such, it offers its performers uncontested moments to shine; when one character speaks here, for instance, others watch (occasionally in tableaux of neighbourly suspicion) or stand in, silently, like living props. This creates a curious and perhaps fitting contradiction: an ensemble performance of an atomised community. Together but apart, they make the stage seem more supportive than collaborative. Instead of the spry tapestry of Under Milk Wood, say, it results in something uniformly quilted, like A Chorus Line.

On page, the story’s rhythms are easier to regulate - whatever reviews say, one of the appeals of any novel is that it is putdownable - but onstage the pace becomes unvaried and eventually wearying. Not every character here is essential. The show becomes unbalanced in other ways, though, when performers resort to caricature either to distinguish between their roles or exhibit their range.

As the decent, battered foreman Bobby Mahon (a contemporary ringer for Synge’s would-be father-killer Christy), Killian Coyle is a solid and sympathetic anchor. But for the schizoid Trevor, who conspires to kidnap a child, he is a quiver of blinks and tics, given the black hat and gloves of a cartoon burglar. That figure was already OTT, you can argue, but it compromises the sensitivity to mental anguish displayed elsewhere in this depressed community. That’s emblematic of an overstretched production that understands, with necessary empathy, why hearts have been set spinning in Ryan’s book, but on stage settles for so many turns.