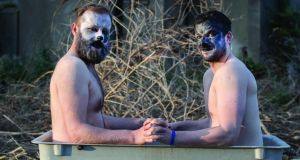 One of the more compelling stories squandered by the Bible is Satan’s temptation of Christ in the desert. It’s a test of divine resolve and mortal weakness that Jesus predictably aces. This short dispute from Gentle Giant Theatre Company restages that encounter, refracting the archetypes of good and evil through more ambiguous contemporary figures, allowing for more some invigorating give and take.

On the 39th day of his fast, here presented as a young man hunting online for humiliation, James O’Driscoll’s tormented character is already in a sea of temptation, before Neil Watkins arrives, with silken modulation, sunglasses and a white tennis-club ensemble, as though hell was a Tommy Hilfiger catalogue. Watkins has toyed with religious and sexual iconography before, far more personally, but here the archetypes are less revealing; the devil arguing justice over Christ’s mercy (Satan punishes the evil), while Christ resorts to a Native American fable of duality and struggle, a standard parable.

Modestly staged by director Mark Fitzgerald, like a story around a campfire, it holds back from outright provocation or revelation. You leave the desert, once again, unsure what has been tested.

Under the Red White and Blue: Greil Marcus’s Gatsby marred by self-indulgence
4

Charlie Daniels, country star who sang The Devil Went Down to Georgia, dies at 83
5