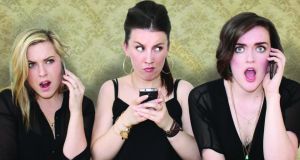 In an ideal world, these scenes of sexual content would raise whirlwinds of outrage. But in the hyper-sexualised, hyper-commercialised society that Tracy Martin’s new play variously sends up and harangues, they land with numb familiarity. A naive young Dubliner goes to dance in European sex clubs, with every predictable consequence. Film agents haggle, revealingly, over a starlet’s nudity clause. A vengeful mother stalks the woman who shamed her daughter to suicide. Performed with admirable versatility by Charlene Gleeson, Clare Monnelly and Aoibheann McCann, these vignettes lurch between grim comedy and extended hand-wringing, as plentiful as the title suggests, but rarely hard enough and never fast. Conceived as a series of theatrically inert phone calls, moreover, the quaint form doesn’t keep pace with its tech-accelerated subject. Martin’s most effective stab at agitprop is to depict female capitulation within an ever-coarsening system. But that makes the blunt comic titillation of the finale, where a sex-line operator juggles a submissive client and her doting mammy, feel like an act of self-sabotage. Sex sells, of course, but it’s going cheap.