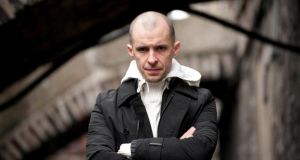 Sell-out crowds who wanted to see Love/Hate’s Tom Vaughan-Lawlor put on a stellar performance last year at the Dublin Theatre Festival contributed to its profits more than doubling.

Vaughan-Lawlor starred alongside Sinéad Cusack and Ciarán Hinds at the Abbey Theatre in Mark O’Rowe’s critically acclaimed Our Few and Evil Days.

New accounts lodged with the Companies Office show that profits at the firm that operates the theatre festival last year increased by 151 per cent from €12,598 the previous year to €31,669.

The increase in profit came in spite of revenues dipping slightly from €1.9 million to €1.89 million.

The largest proportion of income for the festival comes from the Arts Council, which provided grant funding of €766,000 towards the event last year, the same as in 2013.

The festival also received other sponsorship, including non-cash items, totalling €355,378, while it also obtained €105,830 from “funding agencies”.

Last year, it used the Bórd Gáis Energy Theatre for the first time with a staging of Hamlet opening the festival.

According to the directors’ report, “the directors have reduced this deficit and are committed to reducing this further in 2015 and subsequent years”.