Ballet at the movies: A poetic dance across the silver screen

Ahead of tonight's live relay of Kenneth MacMillan’s ‘Manon’ in selected cinema’s around the country, the Royal Ballet’s Director, Kevin O’Hare, reveals how he went from appearing in Bugsy Malone to leading Britain’s largest ballet company 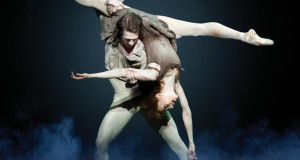 On Thursday, the Royal Ballet’s 2014-15 Live Cinema Season kicks off with a 40th-anniversary staging of Kenneth MacMillan’s Manon, starring Marianela Nuñez and Federico Bonelli. The year’s programme will feature a total of 11 Royal Opera House productions including four Royal Ballet performances and will be relayed live, from the Royal Opera House in London’s Covent Garden, across selected cinemas in Europe, the US, Asia and Australia.

Ballet lovers should stay tuned for Christopher Wheeldon’s rapturously reviewed Alice’s Adventures in Wonderland this December, followed by Anthony Dowell’s production of Swan Lake in March and a revival of Frederick Ashton’s La Fille mal gardée in May.

It’s on a grand scale, but there’s a grand demand. In Ireland, such one-off live relays routinely crack the top 10 at the box office, often outpacing what he most muscular Hollywood product can gross in a week.

“Giselle was the biggest film in the UK and Ireland on the night it played,” says the Royal Ballet’s Director, Kevin O’Hare. “That was a real thrill for us. And that’s why we keep on doing it. It’s different from the theatre. But it does feel like an event. People go with their friends.”

A sort of homecoming
For O’Hare, relaying his productions into Irish cinemas marks a sort of homecoming. Although he and his siblings – including older brother, Michael, the current Ballet Master at Birmingham Royal Ballet – were raised in Kingston-on-Hull, their mum hails from Lurgan, their late father was from Newry and there’s an extended family scattered all around the country.

“It’s very nice to get back there, even if only to cinemas,” he laughs.

He may have grown up in Yorkshire, but O’Hare’s early years have, somewhat disappointingly, little in common with the struggles depicted in Billy Elliot.

“We were lucky enough to have parents who supported us in something we were interested in doing. It’s not easy. There are a lot of dance lessons and auditions and all of that. What we find now at the Royal Ballet School is that there is much more interest from fathers than there used to be, especially with the boys coming through. I think Billy Elliot may have something to do with that. And it has had a very positive effect on young men taking up dance.”

They were a musical family: mum played piano and violin and Saturdays were given over to the arts, not just dance but learning hornpipe and all kinds of performance. Michael and Kevin had both appeared in Bugsy Malone – yes, they got to throw custard pies in that raucous final sequence – by the time the calling came.

“There was a summer school at Ilkley and there we got to meet a lot of the greats,” recalls O’Hare. “From there, it was recommended that we went to the Royal Ballet School, so I went to the lower school at the same time my brother joined the upper school. From then on it was ballet all the way really.”

He joined the Sadler’s Wells Ballet in 1984 and was promoted to Principal in 1990. By the time he retired, aged 35, he had danced all the major roles and had worked with Frederick Ashton, David Bintley, Kenneth MacMillan and Sir Peter Wright. He retrained in management with the Royal Shakespeare Company before returning to the world of ballet in a new capacity.

“I know both sides of it,” he says. “I do keep an eye on everything. But it’s a team effort. We have a wonderful opera house. It’s a big organisation. We have 97 dancers and then around 1,000 people working in the building in different departments – production, costume, healthcare – so hopefully we can produce the best ballet and opera in the world.”

The live relays have not got in the way of how the Royal Ballet does things. “You couldn’t spot the cameras unless you were looking for them,” says O’Hare. “And the Royal Ballet’s naturalistic style of acting is uniquely suited for camera.”

O’Hare is passionate about the possibility for the democratisation of ballet through cinema. Ballet, he insists, is all about passing knowledge along. In this spirit, the Royal Ballet season will open with Manon, a piece created by the late Kenneth MacMillan, once the company’s lead choreographer.

Behind the Scenes
The live relays are enhanced by behind-the-scenes footage during the intervals, in order to further demystify the medium for newcomers. There are additional supporting films available from the Royal Opera website.

“People sometimes worry that they’re not going to understand what they’re seeing,” he says. “But they shouldn’t. You get swept up in the story. It’s very important for us that people who can’t get to the Opera House –because they’re working or because they live too far away – get a chance to see a wonderful production with wonderful dancers. My great ambition has always been to reach as many people as possible across the country and now we’re reaching people across the world.”

The Royal Opera season is at select cinemas nationwide. See roh.org.uk for locations