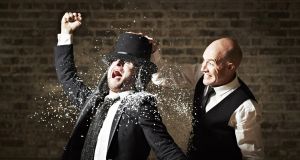 A Christmas Carol at the Ark. Photograph: Ros Kavanagh

The fact that Bryan Burroughs and Aaron Monaghan’s adaptation of A Christmas Carol delivers Charles Dickens’ much-loved novella to an audience of children in less than 45 minutes is a feat in itself. That they manage to do so using a series of scarves and hats deserves extra credit. That they preserve the literary integrity of  Dickens’ text, however, is the most extraordinary part of this playful production for 7+. The children I saw it with were younger than advised but, through precise physical and facial gestures, actors Burroughs and Ian Lloyd Anderson ensure that the story’s meaning is clear.

Lloyd Anderson uses just his fingers to animate the hard-hearted Scrooge, who is frightened into transformation when he is visited by ghosts. Burroughs, meanwhile, takes on every other role. Most touchingly, he animates Tiny Tim with an awww-some puppet that brings a fundamental level of identification to the story for the target spectators. With the aid of Sarah Jane Shiels’ lights, the ghosts are just spooky enough to chill young bones but not spooky enough to scare. This is a great opportunity to introduce a classic Christmas story to children.