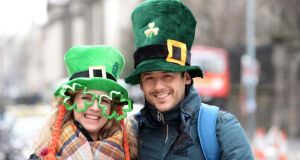 Teresa Ferreira and Miguel Gomes from Oporto in Portugal dressed for the occasion on Sunday in Dublin as the St Patrick’s Festival gets into full swing. Photograph: Eric Luke / The Irish Times

The annual ultimate celebration of Irishness, the St Patrick’s Festival, is in full swing with carnivals and pageants underway ahead of St Patrick’s Day on Tuesday.

The Grand Marshal of the country’s principal St. Patrick’s Day parade in Dublin, comedian Brendan O’Carroll, has already been pressed into service, pushing the button to turn the Spire on O’Connell Street green for the first time last Friday night, kicking off the capital’s four-day festival.

Saturday’s main event was a city-wide treasure hunt, and Sunday’s showpiece is the Big Day Out carnival in Merrion Square. The day-long event features aerial shows, street theatre, children’s workshops, and music acts, as well as funfair rides, which continue until Tuesday.

More traditional entertainments come to the fore on Monday afternoon, with a céilí , albeit a monster céilí in St. Stephen’s Green from 4:30pm. Renowned ceilí caller Jerry O’Reilly will lead dancers through céilí classics, such as The Walls of Limerick and Shoe the Donkey, demonstrated by céilí veterans, the Brooks Academy dancers.

All this leads up to the main event, the parade, which this year takes as its theme, ‘Celebrate Now’, with performers from around the world including Mexico, USA and Germany, as well as homegrown artists, taking to the city’s streets. The Parade begins on Parnell Square at noon and continues on to O’Connell Street and over O’Connell Bridge to Westmoreland Street. It then winds its way down Dame Street and Lord Edward Street passing by Christchurch Cathedral and along Patrick Street where it finishes just past St. Patrick’s Cathedral.

The festival is expected to generate over €120 million, according to Minister of State for Tourism Michael Ring. A full programme of events is available at stpatricksfestival.ie

The Dublin celebrations will be mirrored by events and parades throughout the country. The Cork parade takes as its theme Cultural Concepts and throughout the city over the coming days there will be live music, circus ‘walkabouts’, free street entertainment and a festival food market.

Limerick’ s festival theme is Spring, but the the centrepiece of its celebrations is the Limerick International Band Championship featuring bands from Ireland, the USA and Europe.

Kilkenny’s focus is on its Tradfest with a trad trail, music and dance workshops with highlights including a free outdoor Sharon Shannon concert supported by Steve Cooney.

With many of the events, and of course the parades, being outdoor, the weather will play a factor in the festival experience. Met Éireann predicts a continuation of mostly cloudy and showery weather over the coming days, and it will remain cool for the time of year. On St Patrick’s day, after a mostly dry start, scattered showers will develop, especially in Munster, Leinster and east Ulster. Highest temperatures will range from 8 to 10 degrees.