‘Seamus Heaney: The Music of What Happens’, an exhibition at Emory University in Atlanta, was intended to be a living celebration of the poet and his work. Instead it has ended up as a fitting memorial 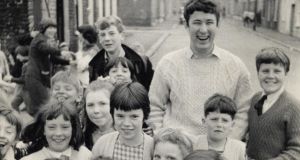 Rarely seen: this photograph was taken for a ‘Vogue’ article on Belfast by Heaney’s sister-in-law Polly Devlin. It shows Heaney in 1962, when he was 23 and teaching at St Thomas’s Secondary Intermediate School, in Ballymurphy. Heaney taught English and also “had a PE class with a group of really low ability first years, 1G, for God’s sake, in a ranking that began with 1A”. Photograph: Condé Nast Publications

When Richard Ellmann, the great biographer of James Joyce, WB Yeats and Oscar Wilde, was dying in 1987, his university, Emory, in Atlanta, decided to establish a series of memorial lectures in his honour. They are now among the most prestigious of such events. Lecturers have included Paul Simon, Margaret Atwood, Denis Donoghue, Mario Vargas Llosa, Salman Rushdie and Umberto Eco. But Ellmann himself knew who he wanted to inaugurate the series: Seamus Heaney.

Ellmann greatly admired Heaney, and the two men had become friends. More than that, Ellmann was well aware that Heaney was arguably the greatest elegist of our times: no one could rise to the occasion of memorialising and revivifying the dead with such dignity, such gravity and such tact. In just one volume of Heaney’s poems, Field Work , there are no fewer than six elegies. They are private, public and somewhere in between. He mourns a friend, Sean Armstrong. He lays the ghosts of two victims of the Troubles whom he knew: his second cousin Colum McCartney and a regular in his father-in-law’s pub, Louis O’Neill. But he also performs the poetic obsequies for three artists: the poets Robert Lowell and Francis Ledwidge and the composer Seán Ó Riada. The elegy brought Heaney’s personal grace and compassion into contact with his poetic gift for conjuring vanished things.

When you walk into the Woodruff library at Emory University, where Heaney commemorated Ellmann in 1988, one of the things you now see are photographs of Heaney himself in exactly the same venue almost exactly a year ago. He looks hale, hearty and at ease. And two thoughts strike. One is the simple, bleak reminder that he is in fact dead. The other is that there is no Seamus Heaney to write his elegy. There have been very fine poetic tributes to him, not least Bernard O’Donoghue’s lovely poem in The Irish Times last month. But the great elegist is gone.

What remain are private memories and public traces. The private memories belong to those to whom he was closest, most obviously his family. But the written and visual records form, perhaps, the one public way to do what Heaney himself did beautifully for others: to acknowledge an enormous loss while celebrating a life of extraordinary richness and achievement. The exhibition at Emory, Seamus Heaney: The Music of What Happens , was intended to be a living celebration but ended up as a fitting memorial. Perhaps it is fitting precisely because it was conceived before his death by Geraldine Higgins, director of Emory’s Irish-studies programme, as a tribute to a living man. (Higgins had some discussions with Heaney about the exhibition, and he had planned to be at the opening.) For what it captures beautifully is the sheer liveliness of Heaney’s long career.

Emory has wonderful material to choose from. It is, in a way, typical of Heaney that the primary collection of his correspondence is there rather than at Harvard, the Ivy League university where he taught for many years. Friendship trumped everything else for Heaney: from the early 1980s he was close to Ellmann and to the distinguished Emory-based poetry critic Ron Schuchard and his wife, Keith. When he gave Emory the papers, in 2003, he remarked that “I feel safe as ever at Emory because of the quality of the people I meet here.”

Although he eventually gave most of his manuscripts to the National Library of Ireland, in Dublin, Emory has the bulk of his letters. It also has a superb collection of printed materials, including some of Heaney’s earliest publications. There are, in addition, physical objects, chief among them the writing desk he used for many years, fashioned from oak boards salvaged from an old lecture theatre at Carysfort College, in Blackrock in Dublin. Heaney described it in a 2007 article in the Guardian as “oak whose grain had been polished by the soft shiftings of a century of student schoolmistresses”. That sheen is still there.

The exhibition is in four sections. The first deals with Heaney’s origins as a family man and a poet and includes some of his very early student publications. It opens out into correspondence with some of the poets who mattered so greatly to him, including Ted Hughes and Michael Longley, and a wonderful letter of encouragement to a 17-year-old unknown called Paul Muldoon. The second examines his writing process, with the help of manuscript drafts. The third teases out his relationship to politics and the public world. The final section is a superb audio-visual display of readings by Heaney himself and by others, notably Liam Neeson.

The overall effect is cheering and consoling: Heaney’s memory becomes, to use the phrase that opens one of his greatest elegies, Mossbawn 1 , “a sunlit absence”. The absence is palpable, but it is warmed by the energy of his personality and illuminated by the radiance of his words.

This consolation belongs in Ireland, too. Geraldine Higgins, herself originally from Ballymena, is conscious that the exhibition would mean a great deal in Heaney’s own country. “It has been an extraordinary and moving experience to curate this exhibition as it transitioned from a celebration of Ireland’s greatest living poet to a memorial honouring the achievements of a lifetime,” she says. “Seamus Heaney’s first memories and last writings show an intense awareness of place as the centre and source of his imaginative gift.

“Indeed, even though Heaney the man travelled, lectured and taught in Britain, Europe and America, Heaney the poet remained firmly rooted in south Co Derry. I wanted to bring a sense of Ireland to Atlanta in maps and images, sounds and words. It would be wonderful and fitting to bring the Heaney exhibition back to Ireland, where those words began.”

Rather poignantly, the central presence in the exhibition is a beautiful kite. It refers both to Heaney’s kite poems for his sons and to A Kite for Aibhín , a late poem for his granddaughter. In it the kite rises like a “thin-stemmed flower”, higher and higher until the string breaks. But the breaking of what holds it to earth and to human reality is not mourned: “The kite takes off, itself alone, a windfall.” As usual, Heaney himself put it best.

Seamus Heaney: The Music of What Happens is at the Robert W Woodruff Library, at Emory University in Atlanta, until November 25th; iti.ms/1hMHlAf

Is this our last chance to see an Irish lighthouse’s ‘beautiful loom’?
6