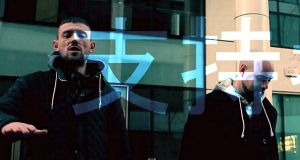 Rapthor x Alan Newman - Kamikaze
Dubliner Alan Newman teamed up last year with Funzo on a pop album called Artifical High. It's only January and Newman is back in the collaboration trail again, teaming up with rapper Rapthor on a hip-hop album called The Advocates. Kamikaze takes its inspiration from dark ghostly 1990s rap like The Gravediggaz. The album is out this week.


The 202s - Oh My My
This Dublin band went quiet four years ago but here they are with a second album on the way in 2016. The trio's sound hasn't changed too much, drawing inspiration from krautrock and synth pop. New single Oh My My, like Drake's Hotline Bling has a beat similar to Timmy Thomas' 1970s classic Why Can't We Live Together and ends up sounding closer to Fujiya And Miyagi in tone.

Fraser Jane - Enough
The London-based Irish singer-songwriter wrote, played and produced her debut single and what an interesting first gambit it is: percussive scratches, tribal drums that skate and voices that boom and groan, soaring strings and a sweet timbre of a voice.

Mmoths - Eva
The young Kildare electronic producer Jack Colleran is putting a long due plan in motion to release his debut album Luneworks on UK label Because Music/OYAE. New single Eva finds his atmosphere as a stalwart texturally but vocally, for the first time, Colleran has the brittle falsetto of Yannis Philippakis of Foals.

ALBUM OF THE WEEK
Cian Nugent - Night Fiction
Having released two albums of instrumental alternative folk and blues albums on esteemed independent American labels, Cian Nugent has moved into vocal territory for his newest release on Woodsist. With help from Brendan Jenkinson on organ and piano and Ailbhe Nic Oireachtaigh on viola, David Lacey on drums and Conor Lumsden on bass, Nugent enriches his songs with extra instrumentation throughout the album's seven tracks, with loose nods to country, bar blues and American folk. Nugent's voice, cracked, tender and youthful, anchors these old songs in a new generation.

NEW ARTIST OF THE WEEK
Rosie Carney
Donegal-based singer-songwriter Rosie Carney is only 18 years old but is developing a melancholic pop style that's all her own. Having been given the nod by Other Voices a couple of years ago, Carney will head to Texas in March for South By SouthWest. Her newest single Antidote, is a song about allowing heartache and loss into your life.

VIDEO OF THE WEEK
Cat Dowling - Cruel
Director: Marc Corrigan
It was 2013 when former Alphastates member Cat Dowling released her fine debut solo album The Believer. Now, long after its release, an affecting black-and-white animated clip for Cruel has appeared to remind us of the album.