Nialler9's How Music Works: do we need more Irish music on TV? 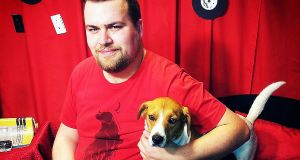 Barry Lennon: "It's important that we support the art being produced in our country and are proud of it.”

While MTV's cultural cachet has been reduced to dayglow Geordies slapping each others arses, YouTube has become the most popular site for music discovery in the last 10 years.

The rise of online has had a knock-on effect on the music TV that has been featuring on our national TV, yet live performances on shows such as Later With Jools Holland in the UK and slots on late-night TV in the US can break a band to another level, even one like Future Islands who were trucking along on the indie circuit with three albums to their name before Letterman gave them a larger platform to strut their stuff.

So YouTube is great for bands but for getting to a career level that is sustainable, most artists need to be seen by a wider audience via mass media. We covered radio a few weeks ago, but where does that leave the promotion of Irish music on its own televisual turf?

Irish television used to have No Disco, The Nightshift and The Last Broadcast as places for bands to showcase their music videos. As for active programming, Other Voices is now in its eleventh year broadcasting on RTÉ with a mix of international and Irish live music, TG4 broadcasts Ceol Ar An Imeall for rock and pop music with a few regular programming outlets for traditional music. RTÉ's Two Tube showcases some Irish bands during the day to a younger audience, The Imelda May Show apes the Jools Holland in-the-round style with live music and The Late Late Show and the Saturday Night Show have recently featured live performances from HamsandwicH, Jape, Buffalo Sunn, The Academic and little xs for eyes.

On the surface, that seems like a decent representation with the exception of TV3. But look beyond the late-night slots, a limited run of episodes and ask, why is there no deep commitment to Irish music on TV?

This week, Barry Lennon, an independent TV producer of online music TV show The Parlour and former director of the now-defunct Richter Collective label, started a campaign using the hashtag #televisemusic on social media to highlight the need for more music on TV.

Not enough representation
“It’s great to have these shows and the increase of Irish bands on the Late Late and Saturday Night Show but the amount of time this makes up on a schedule does not reflect the vast amount of content out there going unnoticed and unsupported,” claims Lennon.

“We talk about how much talent is in Ireland but don’t provide the support to nurture it and provide outlets for it to be seen and heard. Irish people are missing out on being a part of their journey and also a part of supporting growth in the industry.”

For Lennon, dedicated Irish music TV programming would aid discovery for a larger audience, unlike YouTube where discovery is narrowcasted to an audience of one.

“It’s hard to just stumble across a new band or hear new music on YouTube unless you're sent a link or see it on a blog. I think dedicated programming can create a space for people to discover new music content.”

Bands as cultural entrepreneurs
Lennon calls those musicians who are looking to get their music out there “cultural entrepreneurs.” A recent IMRO-commissioned report says the Irish music industry is “struggling to meet its potential”. It also says there are 9,000 jobs in Irish music and that it contributes €473 million to the Irish economy, so maybe Lennon, who says we are stunting the growth of Irish music by not steadfasting support, is on the right track. We nurture and support entrepreneurs in business so why not in culture and music?

“It would also show that we appreciate and want to grow this community rather than wait for musicians to be given validation overseas first with not enough support at home,” Lennon states.

Lennon's background has been largely in independent music TV programming. He has worked for Dublin Community Television, for the label Richter Collective which released records for And So I Watch You From Afar, The Redneck Manifesto and Squarehead. As a producer, he has made music programming - such as the documentary A Joyful Slog, which looked at Irish independent music, as well as Community Of Independents, a music magazine show  - and now The Parlour, which is about to finish its 12-week run of Monday-night recording in the private bar in Dublin's Whelan's venue, which also lends its name to the show.

The show mixes live band performances, industry panels, band interviews and previously-recorded VT for a live magazine show that is as current as it is noble.

TV shoots as an event
“We turned each of the shoots into events instead of block booking the Parlour bar in Whelan’s for a week and shooting all the shows back-to-back,” expands Lennon. “We decided to put on a weekly show with an invited audience offering people the opportunity to come along. This created a better buzz in the room for the end product.”

The Parlour can only be seen on it's official website (free to stream after registration), or live on Sunday nights at 8pm on the site or on the Dublin Community TV channel on UPC 802. The project emphasises community in its approach and content. The show also produces extra content to promote the series online via standalone live performances.

“This was a way of giving something back to the bands involved so they could use them as tools for their own promotion. With no paid marketing campaign, these live videos have reached over 15,000 views on YouTube and counting,” says Lennon.

The show, which was funded by the BAI Sound And Vision, has a large crew - including the producers, director (who also operates one of the cameras at the shoots), floor manager, presenter, editor, location director, audio crew and volunteers.

With the cost of production covered by the fund, why not just upload the shows on YouTube and cut out the broadcasting middle man?

“We released the Community of Independents series to YouTube after we made them,” says Lennon. “After a few episodes, the viewer numbers dropped off as we had no marketing budget to build an audience. Whereas broadcasting the show on a TV station will give the show a chance to reach a larger audience.”

“A Joyful Slog, a previous documentary we made, organically has over 29,000 views on YouTube, yet if this was broadcast at a primetime on TV, it would reach a lot more people after just one showing.”

Sour grapes?
Will people not just see the #televisemusic campaign as sour grapes on the part of an independent music TV production, which has not had success getting its programmes on national TV?

“As we come to the end of producing the first season of The Parlour, we are starting to concentrate on getting the series to large audiences which is something we have not put as much emphasis on before,” answers Lennon.


The role of the state broadcaster
What about RTÉ? Surely a public broadcaster should be required to promote Irish music culture?  On a recent episode of The Parlour (above), RTÉ producer Ian Wilson says Ireland is at the bottom of the list when it comes to supporting Irish music via its public broadcaster. RTÉ doesn't pledge support for it in its charter.

“I think they should provide more resources for Irish music by supporting the development of Irish music content and provide an outlet for it by providing a certain amount of time as part of their schedule,” says Lennon. “They should seek to champion Irish music.”

There is an argument that Irish broadcasters aren't going to feature more Irish music on TV because it won't make them money. What does Lennon think?

“I think it is nonsense and a somewhat defeatist attitude to have. If we look at other countries, they harness and support musicians,” he says, citing his involvement in the Richter Collective label as an example of what can happen for bands.

“The vast majority of artists on the label sold tickets to gigs, albums and toured nationally and internationally to large audiences so it is possible. Audiences will attract advertisers to broadcasters.”