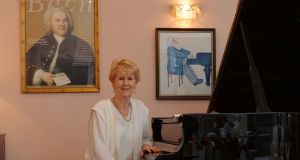 Pianist Veronica McSwiney at home in Bray rehearsing for her celebration concert at the NCH next week. Photograph: Alan Betson

A celebration of Irish pianist Veronica McSwiney’s life in music will take place at the National Concert Hall on Tuesday evening.

McSwiney turns 80 this year, and the occasion is being marked in a concert by other musicians and friends.

She will play solos, chamber music and Lieder with her daughter violinist Aisling O’Dea, soprano Virginia Kerr and others, and piano duos with John O’Conor.

The concert marks Veronica (Ronnie) McSwiney’s many decades in music since she played her first concerto with the RTÉ symphony orchestra aged 14. After advanced study in Salzburg and London, her career ranged from being the first Irish pianist to be invited on a recital tour of the USSR in 1975, followed by many tours performing with their finest orchestras, to 12 years as music director of the Irish National Opera Company.

McSwiney has toured Europe, the UK and America, had an extensive concert career on cruiseships, her own RTÉ TV series Encore in the 1980s and was founding member of the Eblana chamber ensemble. McSwiney’s Claddagh recording of all 18 of John Field’s Nocturnes in the 1970s, at Garech de Bruin’s home in Wicklow, introduced a new generation of listeners to Field’s work.

McSwiney often performs as a duo with her youngest daughter Aisling O’Dea, who plays violin with Scottish Chamber Orchestra.

“She was my idol”, he says, and was “such a help to me at the start of my career”. They both studied with piano teacher Dr JJ O’Reilly at the College of Music. When he was 17, he entered the concerto competition at the Feis Ceoil “and Ronnie agreed to accompany me by playing the orchestra part on a second piano. She was such an inspiration – and I won first prize.”

Later when he needed money to help pay his university fees, “she sent so many things in my direction. She has done so many good things for people all over Ireland in her life, and she deserves to be celebrated.”

The Turning: This film is a total waste of time. Don’t even read the review
5

Don’t Be Evil: The Case Against Big Tech: Important book on corporate giants
7

Rob Doyle: ‘Through writing, you can redeem even a disastrous life’
9