The Academic: ‘We could stay the same indie band, but we never wanted to do that’

Craig Fitzgerald of The Academic on lockdown, touring and changing sounds 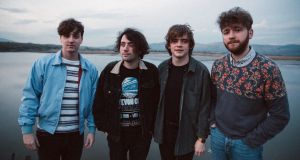 “At the start I found it really strange,” says Craig Fitzgerald, singer/musician/songwriter with Irish band The Academic. He is not talking about the new Fiona Apple album, but rather this self-isolation lark.

“Usually, the band would be busy, so initially I felt totally uncreative, which is odd for me. After a while, though, I got into the routine of treating my bedroom as my workplace, my studio, so I went to work every day, but then I found it difficult to switch off. I did, though, but then that went a bit crazy, so I started doing gardening and ordering books that I thought I should read. That’s what has been keeping me busy, although I’m probably only starting to nail the isolation thing just as it’s starting to ease.”

Like everyone else in the music industry – from bookers to bands and all points in-between – The Academic are on ice, frozen to the point of stasis, waiting for the heat to turn up even by a notch so they can start to move again. It’s lucky for the band, then, that they were able to sneak in recording time before everything shut down three months ago.

Their forthcoming EP, Acting My Age – a six-tracker they could easily have PR-spun into being called a mini-album – may be a stopgap between their 2018 debut, Tales from the Backseat, and their as-yet unscheduled follow-up, but if nothing else it’s a telltale sign of how creative development can drive a pointy stake into the heart of cliche.

It’s easy enough to avoid the potholes in well-worn ground, says Fitzgerald, although he can understand why some bands don’t. They become successful, he claims, they like the instant and residual comforts of that, and so rarely, if ever, push themselves onto different paths.

“We could always stay the same punchy indie band we were on the first album, but we never wanted to do that. I know everyone says this, but you don’t really want to make the same album again. The past couple of months have been extremely important because we’ve made sure not to be comfortable, to listen to music that we perhaps didn’t previously understand.

“We’re trying to take in other influences rather than just listen to indie rock. We’re going back to the 1970s and 1980s – groups such as Talking Heads, for example. It took me so long to get my head around that band, but a few months ago I made a concerted effort and was blown away by the music. Listening to them opened me up to a lot of early New Wave. I just fell in love with the attitude of music acts like The Cars, New Order and more.

“Before we finished touring a while back, we knew we needed to change our mindset; we were quite traditional in the sense of guitars, drums, bass, vocals and the occasional dabble with synths. We were stuck in that format of rehearsal room writing, which can be great as there are some really good songs I can’t even remember how we wrote because they arrived out of jamming. That’s fine, but we felt if we had held on to that approach then we wouldn’t have learned anything else.

“The songs on the new EP have a somewhat more modernised slant, with synths, interesting plug-ins and so on, so we have expanded the playing field. Whenever we get to make the second album, we’ll have much more eclectic knowledge of where we want to go and not be afraid to leave the more traditional framework behind.”

A bunch of blokes

Seven years ago, the four members of The Academic were of Leaving Cert age, writing songs in their downtime and at weekends (Fitzgerald and bandmate Stephen Murtagh wrote one of their best-known songs, Bear Claws, during a sleepover). At no point around this time was success anything else but a pipedream. But a performance at Other Voices brought a posse of A&R types from several record companies  down to Dingle, where they checked out the band and made offers.

At this point, the teenagers knew little of booking agents, publicists, managers and contractual small print. They were, said Fitzgerald at the time, just a bunch of blokes trying to make good music.

Something else was at play, however, and that was The Academic’s independent sensibilities. Choosing to sign with New York-based Downtown Records because the people who liked them almost wanted to be a part of the band, the Westmeath quartet flew to Los Angeles and recorded songs for the debut album. Business matters changed sometime after, however, and they recently swapped the indie label for a global deal with Capitol Records.

You get a sense the teenage years are long gone, with pragmatism now running in parallel with enthusiasm. Following the departure from Downtown, The Academic’s management was in contact with larger record labels but, Fitzgerald says, “we never really felt that signing was the smart thing to do, because with a big label you can make an album and then be forgotten about”.

They didn’t want that to happen with Capitol Records, he continues, “but we met them, and the feeling we got was they were very much into the hard work we had put into the music over the years. It was a mutual discussion; we just felt they were the right kind of people to come on board and help. It is new to us, but on the ground, for the four people in the band, we’re just being allowed to focus on the music, which is all we’ve ever wanted to do. If there’s a record label that will get you to places that wouldn’t be available to you as an independent band, then great.”

We have been here countless times before, of course. One of two things can happen: a really good music act flits from a cool indie label to a prestigious/major label, and things go decidedly pear-shaped. Or they can write the best material of their lives, get played off the airwaves and ether, and sail off into the sunset for a lengthy period of royalty payments. Were there concerns about areas of creative control or other overriding issues?

“We always said we would do our very best at not allowing anyone to do that to us. Once we met the label people, we certainly weren’t worried. The main concern we have is that we don’t want to be just another band on a record label, the ones that get forgotten about after a while. We sensed we would fit in with the ethos of the label – which is more familial than business-like – as well as the artist roster.”

So much, posits Fitzgerald, depends on what kind of artist you want to be, and the team of steadfast people you surround yourself with. “You can get so far as an independent act, but you have to trust bringing people in, as well as having faith in your instincts.”

The initial results are subtle, intelligent changes in musical direction. The forthcoming EP features songs that highlight, reveals Fitzgerald, “an experimental period. We released a debut album that was made in one go and one studio – it was an intense labour of work, whereas the EP was made without worrying so much about genre. We wanted to extend our output to see what we could sound like in different kinds of environments, different music production areas. It’s a bit like experiencing a tasting menu at a restaurant – we could have repeated the style of the songs on the debut album, but we really wanted to see where, creatively, we could land.”

For the moment, that’s a good job done. What happens next is in the lap of the gods and research scientists. The band have a tour scheduled for October, “but I’m pretty sure it isn’t going to happen”.

In the meantime, as social distancing rules continue to relax, The Academic will drift back towards rehearsal spaces and recording studios. Before that, says Fitzgerald, “It’s just a matter of extending the palate of creativity; read more books and listen to bands I haven’t given a go yet.”

The new EP by The Academic, Acting My Age, is released July 10th on Capitol Records.