Sinéad O’Connor at Vicar Street: A once-in-a-generation singer in the form of her life

Outside, a frantic trade for tickets in the cold air. Inside, a bottomless love for the artist 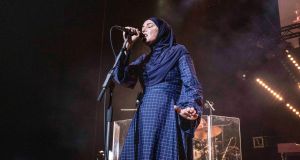 It’s no accident that an enduring musician being on form, often coincides with a wider renewed appreciation. Their energy must send out something of an artistic bat signal to their peers. All of a sudden, they’re everywhere.

Sinéad O’Connor glowed on the Late Late Show recently. At Glastonbury this summer, Sharon Van Etten sang a stunning version of Black Boys On Mopeds, a song Amanda Palmer also chose to cover when she came to the National Concert Hall last Wednesday. The performance artist Christeene performed O’Connor’s songs at their Barbican show, The Lion The Witch And The Cobra, with John Grant and Peaches.

On the Irish musical landscape and beyond, O’Connor is an entire mountain range. Those mountains are part of the territory, always something to return to. Now, coming off the back of a lauded performance at Féile 19, she’s on a nationwide tour, including two nights in Dublin for this brace of concerts at Vicar Street.

With a frantic trade for tickets going on outside on Sunday night, the cold city night air evaporates inside Vicar Street, the sold out venue’s floor wedged with fans a good 45 minutes before the main act – who changed her name to Magda Davitt and then Shuhada’ Sadaqat upon her conversion to Islam, but still performs under O’Connor – appears on stage.

That once-in-a-generation voice opens with Grant’s Queen of Denmark, finding a very specific and brilliant defiance in his lyrics.

The crowd wouldn’t even let the following track, Take Me To Church, finish before they were cheering. O’Connor smiled in return, and on with the show.

Everything was performed with intent, the taut frisson of her band with her all the way, and the audience relaxing into it all. By the time 4th and Vine came along, the gig was zipping by. O’Connor pulled the pace back when she wanted too, as with I Am Stretched On Your Grave, which was given a new minimal-drum-driven urgency.

“These are dangerous days, to say what you feel is to dig your own grave,” O’Connor sang on Black Boys On Mopeds. As the concert evolved, so too did the tracks, many displaying the benefit of new contexts in which they are sung. There are echoes here of how Joni Mitchell grew into Both Sides Now with O’Connor’s back catalogue. The profundity that comes with age has marinated this music in a manner that could not have been anticipated, but is incredibly satisfying.

O’Connor rarely pauses, bar to offer her thanks to the crowd after every song. Thank You For Hearing Me, released 25 years ago comes across as genuine exchange of gratitude.

The Emperor’s New Clothes is a totem of defiance: “You asked for some truth, and I told you.” O’Connor once stood frustrated on the precipice of a society and a world incapable of catching up with her. That was then. This is now. Has there ever been an artist so vindicated?

It’s a formidable achievement to maintain the the impact of Nothing Compares 2 U, a song that long ago seeped into music’s DNA. O’Connor’s voice envelopes the lyrics.

Following Hold Back the Night from the album Faith and Courage, an hour has passed, and O’Connor and band leave and return to the stage with unrelenting rapturous cheers from the crowd. O’Connor arrives back with a guitar to play Three Babies.

In uncertain times, where shaky truths take hold, the affirmation and reassurance of returning to such familiar terrain and finding it even more spectacular than your last trip, to remind oneself of what is undeniable, gracious, true, determined and resilient artistry, is almost a relief. O’Connor is on solid ground here, on stage, under the lights, arguably in the form of her life.