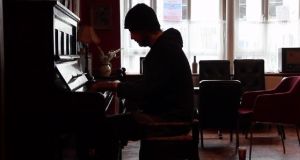 For anyone not acquainted with the life and music of Mayo minimalist composer Conor Walsh, who tragically died of an apparent heart attack last weekend, aged just 36, this 2014 short film by his friend and fellow Swinford man Patrick Dyar does a great job of distilling a little of his essence. Alone in the dilapidated former hotel, that his family had owned for more than a century, the magic and the melancholy that marked out this singular artist cannot help but shine through.

Róisín El Cherif is an up-and- coming singer-songwriter who has worked as an assistant director on Brooklyn and the TV series Vikings among other things. But she appears to have raided The Wicker Man’s prop department for this Florence-esque belter dropped on YouTube earlier this month. The Galway native is currently touring in Australia.

On this preview from his forthcoming Mind of Mine album, Malik breaks his silence to share with us the earth shattering news that that he rather enjoys having sex. Well, we had all been wondering about that.

If one indisputable fact emerged from Will Arnett’s recent takeover of Sirius XM’s music channel, it was that the Canadian actor definitely leads a more interesting life than you or I. Speaking during his stint on the station, the Arrested Development star divulged, not just that he is a personal friend of former Pavement frontman and 1990s alt-rock god Stephen Malkmus, but also that he is currently residing in the Florida home of singer- songwriter (and Hawaiian-shirt-come-to-life) Jimmy Buffett. All of which might help explain this quirky and characteristically dog-eared version of Buffett’s biggest hit, which Makmus has just recorded for the soundtrack to Arnett’s new Netflix series Flaked.

André Rieu: ‘I see a lot of jealousy around me’
7