Rachel Platten: ‘One of my managers asked me if I wanted to lie about my age’

At 34 Platten could be considered a later bloomer for a pop star, but she has turned that to her advantage 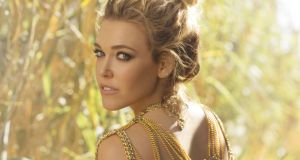 Rachel Platten: “I wanted every bit of me to be honest and raw, because the message I’m imparting is to believe in yourself” 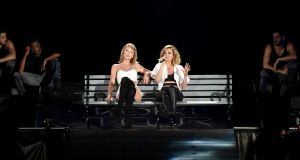 If Rachel Platten’s life thus far were a movie, the triumphant end would have been last June, with her and Taylor Swift’s arms aloft after performing tune-of-last-summer Fight Song in front of a sold-out stadium. The middle, 10 years previously, would have been the slightly less exciting, full of near-misses, minor hits and polite rejections.

But back to Swift. “I was frantic minutes before, but as soon as I was lifted onstage I felt this calm feeling, like I was floating,” she says. “Taylor’s a very warm presence; she’s kind and she instantly puts you at ease. She smiled at me and it was like, ‘You can do this.’ It was so cool.”

Listening to the New Yorker’s breakout anthem, with its pop-coated vitriol and mammoth chorus, it feels like she figured out this ending well in advance. As it turns out, there is some truth to that.

“When I initially finished the song, even though I had nothing going on – no label or reason to believe it would work – I remember looking out on the Hudson river from my apartment in Greenwich Village and imagining a sea of people with their fists in the air, chanting the song, but then being like, ‘Rachel, what are you thinking? That’s so unlikely,’ ” she recalls. “So when that show happened, I was like, oh my gosh, that vision I created, nurtured and believed in had finally happened. It felt bigger than me.

“I’m super hippy, and I read all those books like The Law of Attraction, and it was confusing when it didn’t add up. But now that this has happened, I understand the way it works. That’s the message I want to give to people with this song: to go after what you want, even if it scares you.”

Meeting her in her record company’s offices in London, she is every inch an American pop singer, with the emphasis on all of those words. Her smile is pearly-white. Her hair is tousled so naturally a professional must have styled it. She has a bubbly personality, but is most interesting when she defies the stereotype – as when she says, “I work very hard to be a positive person; it’s not easy to get on the bright side” – or her rare but excellent swearing, which you would never expect to come out that mouth.

On discovering that there is more to her than meets the eye, her trajectory begins to make sense. She spent much of the previous decade pursuing a record deal via the bar scene in New York, along with a million others like her. And she nurtured her love of singing while living in Trinidad at 19.

On record, Platten’s repertoire – most evident in 2011’s Be Here – is a straightforward amalgam of feisty female singers (in the first two songs alone, she borrows the trademark sound of Taylor Swift, Katy Perry, Regina Spektor and Marina and the Diamonds). However, Fight Song shows that she is capable of finding her own voice, particularly with emotive refrains such as, “I don’t really care if nobody else believes / ’Cause I’ve still got a lot of fight left in me”.

“I don’t think the labels who turned me away before were wrong,” she says. “I don’t think I was good enough, and the songs wouldn’t have worked as well. I needed to have all the experiences I had in order to have a song like Fight Song to communicate with the world.”

The global success seems to have come at a fortuitous time for Platten. Four years ago she married New York lawyer Kevin Lazan, and they are still in wedded bliss. With the fairy-tale marriage, the Sony deal, the No 1 and a forthcoming world tour (Ireland is on the cards, she promises), it is certainly a tidy third act.

Yet if this picture – wife, pop star 10 years in the making – sounds at odds with the bright young things in the charts today, age might be a factor. At 34 she could be called a late bloomer, especially for the pop world, where 22 is retirement age (at least according to One Direction).

“I actually find that my age has been an advantage, because I know who I am and I’m very grounded,” she says. “I’ve experienced a lot and I’m not in danger of fame messing me up or confusing me. Before, when I got close to being signed and it didn’t work out, it broke my heart. But I just kept on playing any and every gig I could, and I got involved with a charity, Musicians on Call, where we play to hospital patients, and that’s so rewarding I know it’s just my ego if I need to be higher up than I am right now.

“But it’s funny. Years ago – because you have to decide on these things early – one of my managers asked me if I wanted to lie about my age. He suggested saying I was five years younger. A lot of actresses and artists don’t tell their age, or they hide it or fudge it. It happens all the time in Hollywood. But I said absolutely not.

“I also wanted women to know that it’s not too late to make anything happen. There are no rules you can’t break. There’s no ceiling you can’t smash through.”

You can see why she is a natural member of the Taylor Swift squad (yes, they’ve become friends: “I’ve been to her house. We text. She’s awesome”), and how she slots nicely into today’s landscape.

“There are a lot of empowered female artists, and it’s so cool. It’s not about girl catfights any more – it’s about supporting each other.”

Of course, it is much easier to be a one-hit wonder than to sustain a career, and Platten’s challenge now is to make sure her first album with Columbia, Wildfire, capitalises on her exposure. It wasn’t the most helpful of moves to release it on January 1st, during music’s graveyard shift.

Still, it has fared better in the US – debuting at No 2 on iTunes and No 5 on the Billboard charts – than its soft release allowed in Europe. She remains philosophical, perhaps more appreciative of her current position having pursued it for so long.

“I feel like if everything else went away at this point, I’ve made an impact on the world with a song that has helped people, and I feel incredibly grateful for that. But I don’t feel in danger of missing this opportunity. I just feel very determined. I’ve kicked the door open and there’s no way I’m going to let it shut now.”