On the record: High ticket prices come down to gigonomics

It’s about supply and demand, and the Beyoncés and Bruces are in short supply 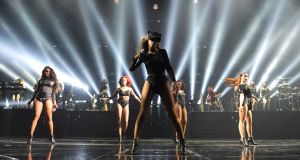 Today’s column is going to attempt to answer a question which gets asked a lot and is rarely resolved. As anyone who’s decided to go to a live show in the last few years knows only too well, tickets have become expensive.

So why exactly do tickets now cost so much? For example, it costs an arm and a leg to see Beyoncé (up to €144 for Croke Park), Disclosure (€49.65 to see the brothers work it out in a field), Ennio Morricone (€156 for the maestro) and Bruce Springsteen (€98.50 and counting for the Boss) when they come to town. All above prices do not include Ticketmaster’s taxes and charges, of course, which is another day’s work.

The obvious answer is not quite the right one, but it’s one worth teasing out nonetheless. It’s supply and demand – and they’re not exactly making loads of Ennios, Bruces and Beyoncés any more. As long as people keep paying mad money for tickets to live shows, the prices will go up and up.

So should music fans take a leaf out of Liverpool FC fans and boycott the shows to bring down ticket prices? The problem here is that we’re comparing apples and oranges. In the case of football teams, it’s a week-in-week-out affair and £77 tickets therefore price a huge number of fans out of the game. You may think that Springsteen and Morricone are here every other week, but it’s usually once every couple of years, so there’s more of a rarity factor.

There’s also the fact that the number of people who want to see Springsteen – who sold out two Croke Park shows in a morning, unlike Beyoncé who didn’t even get one away – far exceeds the number of tickets available. If some fans decide to boycott, many more will jump in to take their place. Why else is there a market for such ticket-touting websites as the Live Nation-owned Seatwave and Get Me In?

But the main reason for high ticket prices comes down to the changes in how artists make their living. Once upon a time, an act toured to promote the album; now, they release an album to plug the tour. The collapse in revenue from record sales means acts tour to keep themselves in the style to which they’ve become accustomed.

More touring doesn’t, however, mean a reduction in ticket prices. In order to stay touring in the first place, the show has to change each time around to ensure there’s a reason for the dedicated fan base to return each time and keep the money rolling in. Putting together different touring productions and stageshows require investment and increased costs, an outgoing which has to recouped inevitably by increasing ticket prices down the line.

There’s your answer. As with everything else, it’s down to economics and, in this case, the changing nature of gigonomics. Now, does anyone want to buy a ticket to see The Stone Roses? Anyone?