Plus, new songs from Dioscó na mbó, Tim Chadwick, We Cut Corners and This Side Up 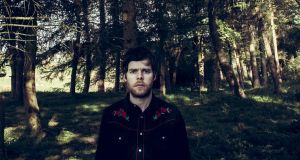 TooFools - Touch
If you dig the falsetto soul pop of UK band Jungle, you'll love this Dublin band's new single. Toofools, lead by Lorcan O’Dwyer and Steven McCann, have delivered a funked-up slice of disco-soul. The band play a headline show on November 24th in Button Factory and an EP is forthcoming.

Tim Chadwick - Dreamer
Dublin singer-songwriter Chadwick follows up his debut single Blindfolded with an equally pop-focused song. He doesn't want to wake up. In a week such as this, we get you buddy.

This Side Up - Full Fat
Staying in Sligo, the county's premiere hip-hop group formed at a vinyl-only night in McGarrigles in 2008. This week they dropped the title track from their debut album (due next week) and it's a fine track mixing a throwback sample style with modern hip-hop production.


NEW ARTIST OF THE WEEK
Spudgun
Space goo is the self-described genre for this recently formed Dublin band made up of the core five piece of Alex Moore, Brian Butler, Ray Sherlock, Robbie Reilly and Sam Burton with “celestial guests” Ena Brennan, Kevin Corcoran and Oisin Murtagh. Debut single We Share  the Space is a psychedelic jazz number and the band have a strong live reputation. Catch them Friday, November 11th, at Beach's gig in Dublin's Sugar Club.

ALBUM OF THE WEEK
We Cut Corners – The Cadences Of Others
John Duignan and Conall Breachain's third album as a duo has the hallmarks of a band gelling at their best. The two men's established gifts for creating sharp simply-constructed melodic indie-rock and slow moving ballads are intact. The comfort in their dynamic has allowed them to bring in guests such as Conor O'Brien (Villagers), Booka Brass and the Fratres String Quintet to add new dimensions. Opener Middle Kids recalls Arcade Fire, a band that they would have struggled to sound like on their first two Choice Music Prize-nominated albums. Of Whatever and Reluctant Recluse are songs in their established style augmented by rich strings and Oh is indicative of the weight they put in their lyrics. The Cadences Of Others feels then like a band fine-tuned.