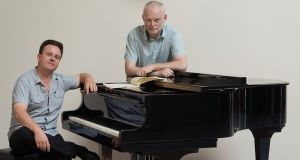 Everyone loves them, those compositions where different composers are invited to write different parts of the one work, or write pieces on the same or related themes.

The have been two big ones in Ireland in recent years. The 15 pieces of The Ros Tapestry Suite were released on CD a year ago in performances by 12 different pianists. The pieces were commissioned by the New Ross Piano Festival, which is coming around again from September 25th-29th. And the new album of the 19 pieces of Crash Ensemble’s nationwide Crashlands project of 2017 will be launched next week.

There have of course been much bigger projects. In 1819, the composer and music publisher Anton Diabelli commissioned variations on a theme he wrote himself. Fifty-two colleagues delivered pieces, and Beethoven famously wrote a separate set of 33. Austrian pianist Rudolf Buchbinder recorded the lot back in the 1970s.

After the death of Gioacchino Rossini in 1868, Verdi proposed to his publisher, Tito Ricordi, that “Italy’s most eminent composers should write a requiem to be performed on the anniversary of his death”. Verdi’s extraordinary idea was that after the first performance the work would be “sealed and preserved in the archives of the Liceo Musicale, from where it should never be removed again,” with the possible exception of later anniversaries. Also in the 19th century, Russian composers wrote a number of collective pieces in honour of the publisher Mitrofan Belaieff.

For a 1942 tour the American conductor André Kostelanetz commissioned three composers (Aaron Copland, Virgil Thomson and Jerome Kern) to write pieces that were to present a “musical portrait gallery of great Americans”. Later that same year the English conductor and composer Eugene Goossens, who was then music director of the Cincinnati Symphony Orchestra, commissioned 18 composers to write fanfares that would be “stirring and significant contributions to the war effort”.

In advance, of course, it usually looks as if the projects will be greater than any of their component parts. But mostly it turns out to be exactly the opposite.

Beethoven’s Diabelli Variations are renowned in the musical canon, but the other variations, including ones by famous composers, are pretty much forgotten.

The Messa per Rossini project faltered and the planned premiere never took place. The piece was not heard in public until 1988 and Verdi’s recycling of his Libera me for Rossini in the requiem he wrote in memory of the writer Alessandro Manzoni is what is now remembered from the Rossini project.

Copland, through his Lincoln Portrait and Fanfare for the Common Man, provided the key legacies from the American commissions. The projects themselves live only in the history books. The same sort of selectivity is likely to act not only on Crashlands and the Ros Tapestry Project, but also on the most intriguing part of the National Concert Hall’s new Chamber Music Series.

The series as a whole runs to 54 concerts between next Sunday (opening with the 20th instalment of Conor Biggs and Michel Stas’s huge Schubert song survey, Schubertreise) and May 24th, 2020, (another song recital, featuring Schubert and Strauss, by soprano Anna Devin with pianist Dearbhla Collins, part of the Dublin Song Series).

Song is at the heart of the chamber music concerts’ major innovation. Dáirine Ní Mheadhra has conceived her Tionscadal na nAmhrán Ealaíne Gaeilge/Irish Language Art Song Project to beef up the number of art songs in the Irish language.

She has commissioned 50 songs to Irish texts, by composers at home and abroad, and all 50 songs will also be recorded. By November, both the recordings and copies of the scores will be available for free download from a dedicated website hosted by the Contemporary Music Centre.

You might well wonder what has encouraged such a huge growth in the NCH’s chamber music offerings. Maybe it’s just part of a long-term master plan to provide more concerts on a smaller scale that primarily involve Irish performers. That would certainly be consistent with how the chamber music season as a whole has been growing.

But it also will provide flexibility in the years when the NCH will be dark while the scheduled redevelopment of the venue takes place. Chamber music events will be much easier to relocate to outside venues than orchestral or other large-scale gigs.

The originally proposed date for the start of the hall’s closure is just 20 months away. Preparations for the move of the management of the National Symphony Orchestra from RTÉ to the NCH has been under way for more than a year.

The bad news is that at the moment just about everything pertaining to these changes is as clear as Brexit has been for the last three years. Not even the musicians whose lives and livelihoods will be affected know what to expect.