Plus songs to hear from Wastefellow and Solange 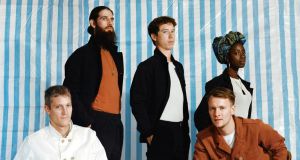 Franc Moody pull on the Marigolds

What Disco funk-pop bops
Where London
Why Despite the intentions of Disco Demolition Night, disco never really went away. The genre’s grooves morphed and changed into new shapes and stripes from the DJ-rooted nu-disco electronic productions of the past 15 years from the likes of Metro Area and last year’s breakout dance hit Neutron Dance by Dubliner Krystal Klear to the success soul-funk-disco pop of UK duo Jungle. Even the queen of funk, Chaka Khan, has returned to her roots for some orchestral disco on new album Hello Happiness.

Their sound is DIY-driven, which involves finding out that recording the perfect handclap takes three pairs of hands and one pair of Marigold gloves. Salt shakers, radiators and the sound of zipping flies have also been used in their recordings.

Their eight-track mini album Dance Moves encapsulates their appeal in one tight package, head-nodding disco-electronic-funk with an emphasis on earworm choruses such as Dance Moves or the pristine four-million streamer and digital-bass and guitar groover Dopamine.

Live, the band swell to six members to make their intergalactic synth-pop funk soar. You can catch them at the Workman’s Club, Dublin, on April 13th and Forbidden Fruit Festival, Dublin, on June 1st.

Solange: Almeda
Singling out one song from Solange’s new album, When I Get Home, is tough because the album’s mood hangs together across 19 tracks that are smudged together like a hazy reverie. However, Almeda, named after a neighbourhood in her hometown, Houston, encapsulates the album’s themes of home and black identity. In its sonics, it references the chopped and screwed style of hip-hop that originated in Houston, with nods to Atlanta and appearances from The-Dream and Playboi Carti. By listing black cultural items, Solange seeks to reinforce the spiritual and social importance of black empowerment.

Wastefellow: On the Dry
Diolmhain Ingram Roche’s project Wastefellow project is a marriage of off-kilter neon-glowing electronica and roving vocals. The Dubliner’s latest track, On the Dry, is his poppiest and brightest moment yet, a song built out of eerie synths, bass drops and an expressed desire to imbibe creativity and fun.